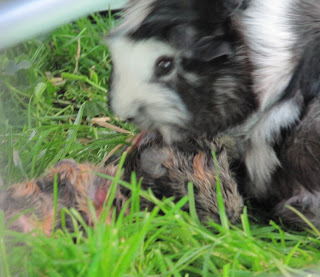 I had only JUST gotten home from collecting the newest three girls (see last post), and put the kids down for their afternoon nap, when it occurred to me to check on Galaxy. I noticed she was hunching a little, and on closer inspection noticed two messy little bubba's being cleaned up right there on the grass in the puppy pen! I sprinted back inside for my camera and managed to capture bub no. 3 emerging. Galaxy quickly set about clearing up the sack away from it's face, but was distracted by bub no. 4 emerging about 30 sec later. She then ignored the fourth bub and went back to cleaning no. 3. 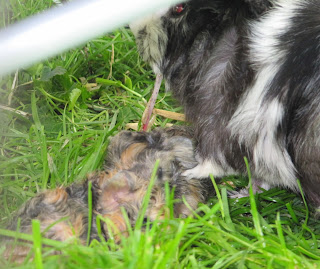 I gave her about 60 seconds to help her last baby breathe (which feels like an ETERNITY in this situation!), but she was too focussed on her current cleaning job, so I had to reach in and help. I don't have terribly long finger nails, so holding the bub gently but firmly and getting the sack to break was a little tricky, but once it was off, and baby had a bit of a rub down to help get the gunk out of his air way, he seemed to be breathing quite well. I popped him back in with his brothers and Galaxy eventually made her way over to him and quite vigorously licked him clean too! 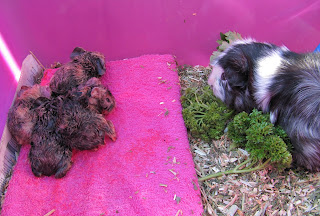 Once the delivery was over and Galaxy has passed the last placenta I placed the little family back into the birthing box... kind of the wrong colour for a family of boys though! :P

They're all dry and so so gorgeous now. Galaxy is doing a brilliant job. All four babies are a mix of cream and cream agouti - very much Liam's sons. Two of them have rosettes and will most likely end up looking like Sheba-mini-yaks, and the other two are smooth, so will resemble Shelties as they grow up. I'll get some individual photos in the morning light tomorrow. They are definitely all boys though and will be named Jonah (the runt), Jarvis, Jethro and Jax! 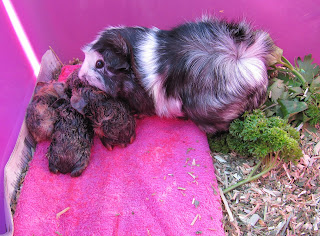 Posted by EmmasBears at 6:18 AM