Today was quite a busy day! ALL the pigs got grass time, which meant my lawn was a scattering of puppy pens, shade blankets and hidey houses! ALL the cages got cleaned out... which is quite a mammoth task. Sprout's cage and Malakai's cage got re-located to behind the mansion cage (as we've had a bit of trouble with noise, smoke, and heat on the other side of the yard). AND - 6 new girls were dropped off!

We have a rescue mum and her babies (Delilah, with Suri and Sadie): mum is staying here but the two week old babies will be looking for new homes. We have two new curly babies from a local breeder who need a little TLC due to a mange mite/fungal skin condition (Tabitha and Xeraphina). And another little rescue girl who will be travelling up to Hervey Bay next week to meet her new family! 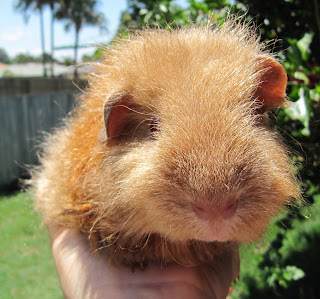 I am so bewildered by Delilah, she looks like she might be a texel x, but her coat is incredibly course, much more like a rex than the softer fur of a texel. She is quite unusually coloured as well. She's a blend of ginger and beige/gold, in what looks like an argente patterning (most noticeable around her face).

[Argente is a similar coat marking to the Agouti. Where the agouti is a darker hair base colour with a lighter tip (black base, white tip: silver agouti), the argente is a lighter base with a darker tip, or two very similar tone colours (beige base, gold tip)] 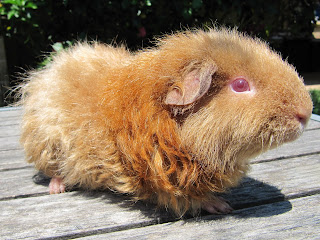 Then, on top of all that, I think she might be satin. Or at least carry some satin ancestry. She definitely has a real shimmer/satin effect to her coat, and it has the same hollow-shaft look as I've seen on other Satin-breed guinea pigs I've owned in the past. I will admit that I don't have as much experience with the satin, and it has been over a decade since I've owned a satin rex. So I could be mistaken - just going by my observations! 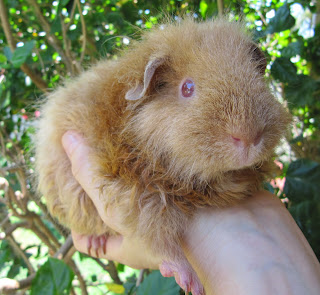 Delilah really does have some awesome colouring, and some unusual fur though. I'm unsure of her age/origins due to her rescue status, but it will be interesting to see what happens as she re-gains a bit more condition here, and if her coat thickens out even more!? 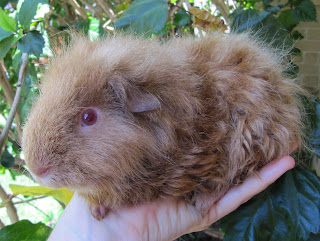 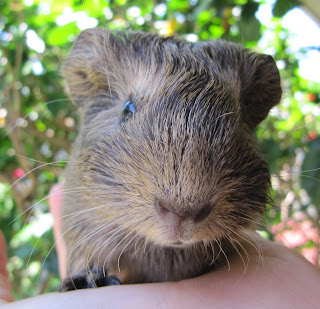 Suri is one of Delilah's daughters. She is a cream agouti and cream smooth coat. Her fur does have a distinct wiggle through it (mum's influence I'd say), but I don't think it will get curly. It may end up with a bit of length to it though. Daddy pig is unknown. (It's probably safe to assume he was agouti though!). 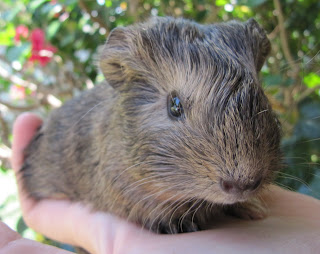 Suri will be available for adoption from the 25th November. Email me at eleb2000@hotmail.com if you think you have a spot for her in your family. 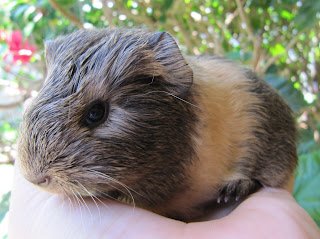 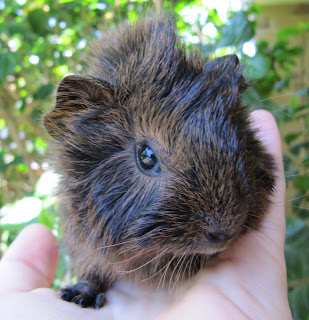 Sadie is Delilah's second daughter. She is a very richly coloured golden agouti and gold Abyssinian girl. I'd say that she probably looks a lot like her dad (considering the agouti colouring for both her sister and her, and the funky rosettes had to come from somewhere!). 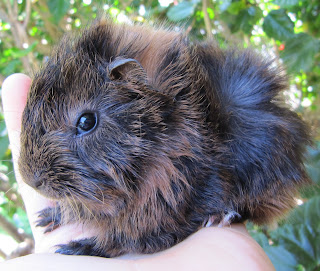 It's impossible to tell what her coat is going to do in terms of length. Delilah is a mid-length pig though, so it's quite possible that her babies will have a bit more length than usual as well. Sadie is looking for her new home too, and will be available to meet her new family from the weekend of the 25th. Email me at eleb2000@hotmail.com if you think you have a spot for her in your family. 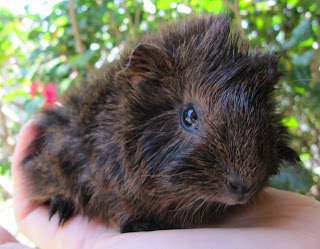 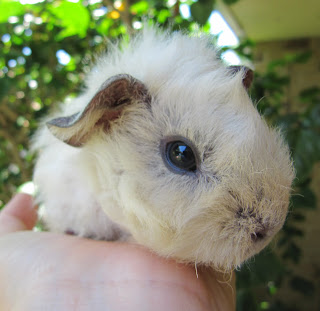 Xeraphina is the most interesting colour and the most interesting coat-type! It's a little tricky to say what she'll look like once her mites are treated (she's missing a fair bit of hair), but I'm pretty excited to watch her get better, and for her coat to grow back in. Her hair really does look like a pretty blonde colouring. Not quite cream, not quite buff... 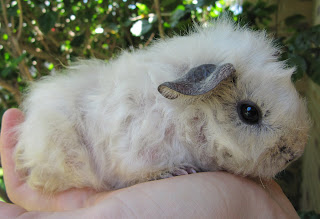 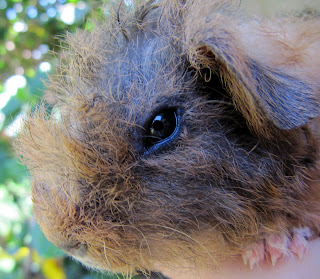 And this is Tabitha - also suffering from a bit of hair loss, most likely due to mites. She's been treated as well and we now play the waiting game to watch her coat grow back in. If the curls on her rump are anything to go by, she will be stunning. 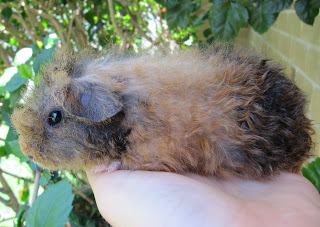 She's a golden agouti and gold texel x. So it will be interesting to see how much length she ends up with as well. 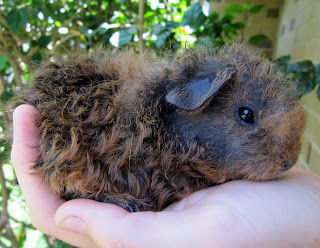 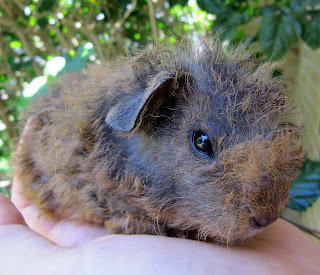 'Flick' - Little Abyssinian x that will be heading up to Hervey Bay: Posted by EmmasBears at 5:11 AM