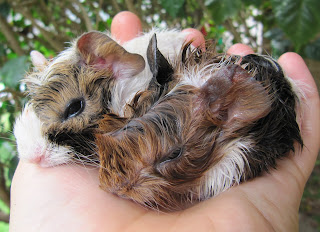 I was holding Ginger at about 11am this morning. She was huge, but her pelvic bone wasn't anywhere near full dilation yet. So I left her hanging out with Ripley, and took the kids out to the shops for an hour.

When we got home I just happened to glance over and see something brown and fluffy lying down next to Ginger. At first I thought it was Ripley - then it occurred to me that it must be babies. Babies that weren't moving.

I left all the shopping on the floor and quickly checked what had happened. It looked like the scene of a massacre: dead guinea pigs and blood and placentas everywhere. And a very bewildered looking Ginger sitting in the middle of it all. I quickly checked some of the still babies - they had the sacks over their faces and back, broken away around their tummy/paws, probably from struggling for air.

Two babies were moving. One was still partially in her sack, but her face was clear - probably a stroke of luck that saved her life. The other was already sitting up, and mostly clean. And was probably the first born. Two of the three dead babies were still warm. I had JUST missed it.

*** If you'd rather not see dead guinea pig babies, it's probably best to stop scrolling now *** 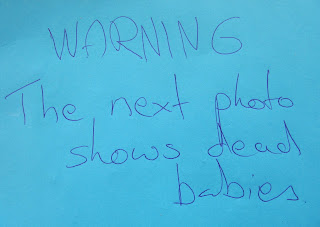 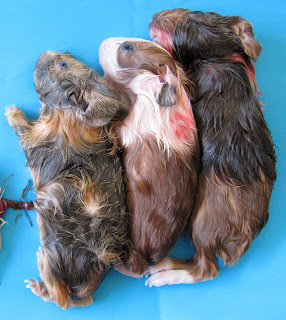 These three were perfect. The first was a little boy, looked like he was a gold and gold agouti Abyssinian (85g). The middle one was a little girl, ginger and white smooth coat (70g). And the third one was a big tri-colour girl (100g). All really good sized babies, and a beautiful mix of colours too.

There really is nothing more devastating than watching a mumma pig's tummy grow, and feeling the babies alive and well, kicking away over the long 9-10 weeks of a guinea pig gestation. Then loosing perfectly healthy babies simply due to bad timing!

If nothing else, this litter has just reiterated that even though I've been doing this for a LONG time, it doesn't mean I can prevent unnecessary deaths - even when they are preventable! 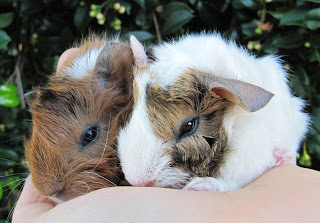 The two surviving girls have been named Gypsy and Grace. They're still not out of the woods yet, and Grace in particular is still looking quite fragile. 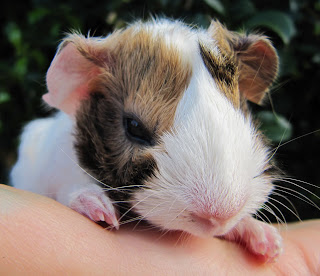 This is little Grace, she's a white Abyssinian coat with cream/cream agouti eye patches. She weighed in at 90g. She was also the only baby cleaned properly, so I think she was firstborn. 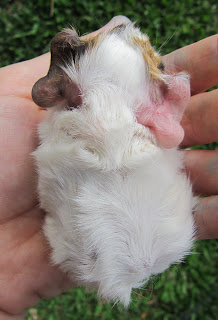 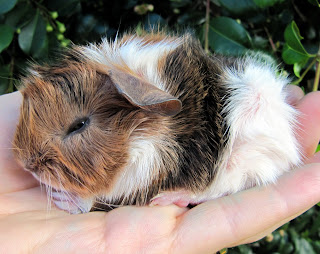 This is Gypsy. She's a mix of ginger, golden agouti and white. She has a stunning Abyssinian coat as well. She weighed in at 100g. All babies were really good sizes, and were almost half a kg in total. 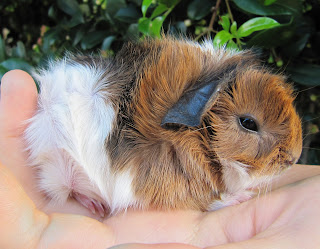 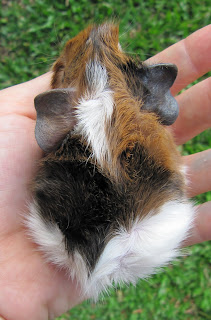 And when I was taking photos of the girls this afternoon, I noticed that they both have a little patch of colour on the backsides as well! Too cute! 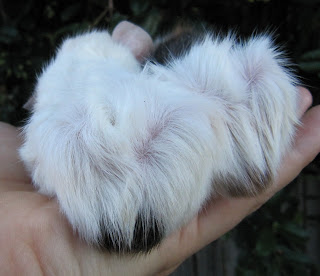 Posted by EmmasBears at 1:52 AM