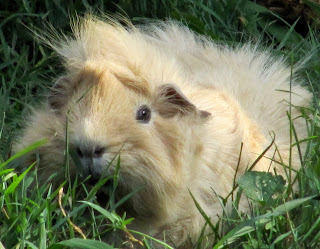 A bit of a so-so week of gains this week. The new girls being treated for mites are doing well though, and so are Phoebe's bubs - HUGE gains for such tiny creatures! 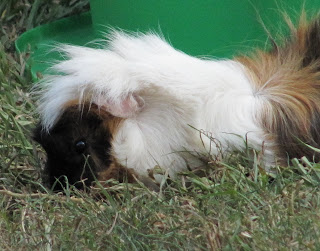 We had a bit of an incident with our free-ranging this afternoon too. I thought I'd latched Malakai's cage properly after topping up their grain (especially now that he sits inside the perimeter area of the mansion cage), but I hadn't! And yes, he did what any male guinea pig would do - he realised he could get out, and he found himself some willing partners! Thankfully I was there, filling up water bottles and grain bowls when I heard the ruckus, but after checking the nether-regions of the lady's in question (Alice and Galaxy), I do believe he may have hit his target! Cheeky little bugger. We still don't know if he's actually 'live' yet though, so it may have just been a test-run, so to speak. But I do know that I'll be doubled checking those latches from now on!

Not such a problem when everyone's safely locked away in their cages - all he would have done is go for a bit of a walk in the safety of the perimeter area. It was just one of those moments where everything just worked out for Mr Malakai! :P

To be honest, my main concern was more about Alice and Galaxy only just having had their litters a few months ago. I like to give my girls a bit more of a break then that usually! I have been reading a very informative document - 'Advanced Guide to Keeping Cavies' by another Brisbane Cavy Breeder though, and he explains how a female shouldn't be in show condition (ie. nice and fat) before falling pregnant due to the possible complications from carrying the extra weight. He explains that he actually gets his girls to loose a bit of condition before they're put in for breeding. And here I was trying to get my girls back into full-fatness between litters!

What I've taken away from that piece of information is that perhaps having a blanket-rule of '4 month break between litters' isn't going to work every time. Some mum's might need the full 4 months to recover, while others might get too conditioned/fat over that time. That's what I'm telling myself right now anyways - until I know if Malakai's misadventures have amounted to anything in a few weeks time! :P

Still, there was a lot of VERY interesting reading in the e-book. I'd recommend it if you're interested in the finer points of genetics: coat types, dominant/recessive genes/ colour inheritance etc. You do have to remember that it is one person's opinion though, and I don't agree with everything written, but it certainly gave me some information/guidance that I wasn't aware of already. There's always something to learn, no matter how long you've been in the game! :P 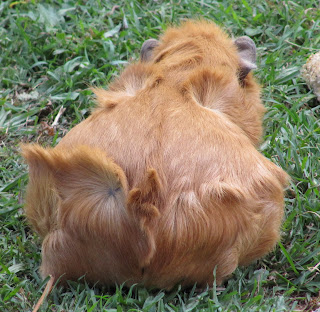 And after that rather long-winded ramble, I'll keep my next few captions short! These are just some shots of captured of Ginger this afternoon - showing off that incredible belly! I'm actually thinking we might have 5 babies... at least! This will definitely be a birth I'll need to be present for! 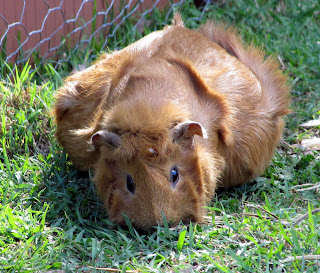 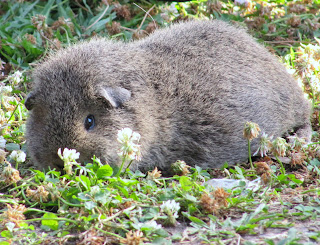 And Bonnie has surprised me by starting to open her pelvic bone this week too. I first noticed it earlier in the week, and decided to bring her inside for monitoring last night. She's continuing to open, and may possibly have her babies in the next few days. OR - she might do a 'Ruby' on me, and hold onto her litter for the next two weeks before her estimated due date! :P

(I had to include this pic too - it looks like Phoebe is telling Bonnie what to expect from birth... Bonnie looks a bit shocked!) 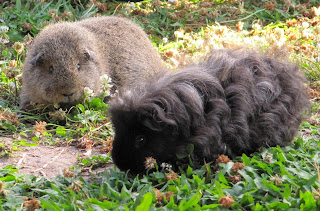 creatures!
Posted by EmmasBears at 12:55 AM