I bought Phoebe inside last night. Mostly as a precaution. I didn't really think she'd deliver yet.

But she did! And it wasn't in the middle of the night either, it was approx 6:30am this morning. And I could have been there to help her out if I hadn't been making breakfasts and breastfeeding and mediating the morning squabbles between the kids!

By the time I'd gotten a chance to pop my head in, the birth was over and two gorgeous little babies had already passed. It just about broke my heart. The two stillborns were both female, and both cream and white. The smaller one had a big white stripe up her nose and weighed 60g (runt) and the larger one weighed 80g. Both good sizes, and otherwise perfect.

Once I snapped out of my distress, I thought I'd better check what else was bobbing around underneath Phoebe's curls - and found two very strong looking babies, both in black and cream. A little girl I've called 'Nixie' - who will be staying here. And a little boy I've called 'Noah' - who will be looking for a new home. 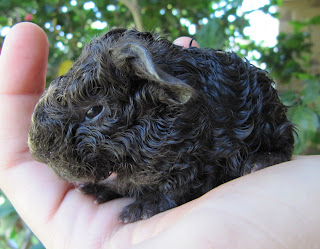 Noah weighed in at 75g, and is a dark slate/grey (not quite black) and cream boar. He has just the tiniest hint of cream up his nose, a dot on his back and a dot on his toe.

He is a purebred Texel, but will not be papered. His adoption fee will be $40, and he will be available from the weekend of the 3rd Dec. I am anticipating that a lot of families will want to take him home, so for the next week I will be taking expressions of interest in him, then on the 17th I will randomly draw a new family. This seems like it will be the only fair way to go. Email me at eleb2000@hotmail.com if you'd like to be considered for his new family. 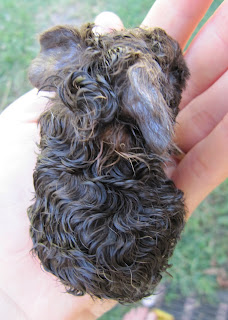 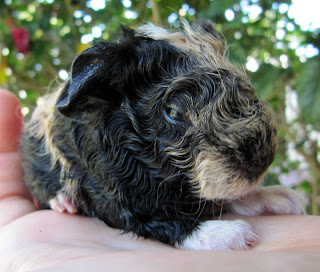 And this is our surviving girl - Nixie. She was the biggest in the litter, weighing in at 90g. She is a black and cream sow with little white socks! She will be staying here at the caviary, especially after I lost two of her sisters! She will be an important addition to diversifying our genetic pool in the texels. 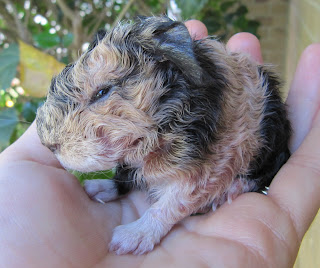 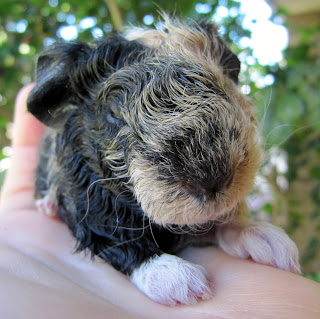 Posted by EmmasBears at 3:05 PM