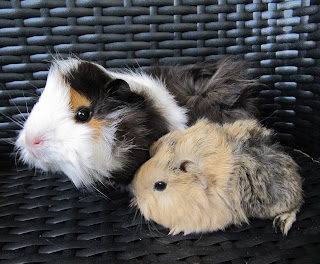 [Petal and Jonah went to their new home today!]

Another pretty good week for everyone. Jonah was my only concern, staying the same weight this week. He is probably the most relaxed out of his litter though, and I was wondering if maybe he was getting held back from the best food by all the other more boisterous babies. He left for his special new home today though, so will get lots of food all to himself! 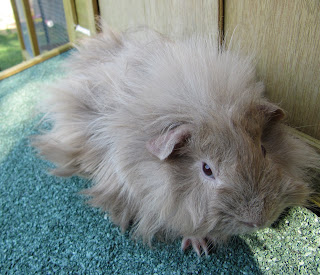 I thought I'd take some progress shots of my sheba-look-alike girls too, before their hair looks any worse! This is Milli at 11 weeks old. She has a crazy, full fluffy coat a fortnight ago... then Ripley and Rafia moved in and the hair-chewing started! 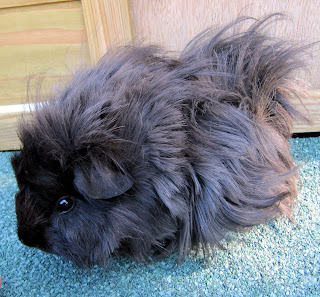 Elodie (also 11 weeks) has probably been chewed on the most - and so looks the most ratty at the moment! You can just make out the occasional extra long strand of hair - that's how long it ALL was... before the wanna-be-hairdressers got to it any ways! :P

It's hard to say why some piggies chew hair, and other's don't. Some will constantly chew their own coat, while some just constantly chew the coats of those around them. It can be from boredom and/or stress, but I think in this case, for Rafia and Ripley anyways, it's more a case of curiosity. They were living with only other short haired piggies before, so to find themselves in a cage full of these crazy fluffy creatures is quite overwhelming. I suppose they've got no other way of exploring what all that hair is, other than to chew it! Thankfully they don't self-chew though. Short-hair piggies are usually pretty good like that. 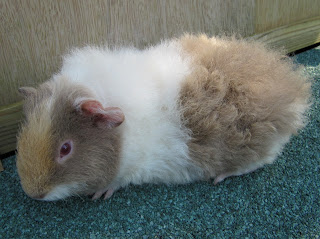 And lastly, this is an update of Lavender Mist (9 weeks). Her hair hasn't gotten much more length, so I believe this is similar to what she'll look like as an adult. It's very much like a short haired texel: soft, cotton-wool-like curls. Rather than the more wire-like rex breed (he head is a little more rexish though).
Posted by EmmasBears at 5:52 PM