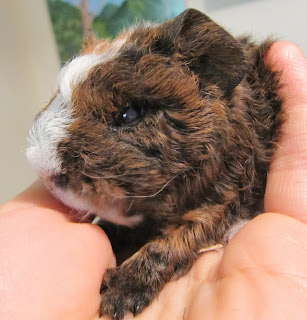 I noticed that the eyes on two of Ruby's boys were a little cloudy yesterday. Naturally I had a little panic, thinking that we'd had more hay-poke injuries. But on closer inspection I could see that the bottom eyelid had rolled in a little, making the curls rub on the eye. A quick bit of google research and I had my answer - entropion. Seen in lots of different species (cats, dogs, humans...) and apparently really common in the curly haired guinea pig varieties (rex/texel/teddy etc). 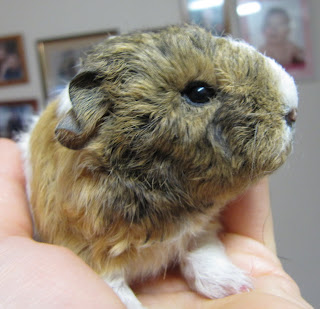 I was able to get some valuable advice from a breeder who has had a lot more experience than me working with the texel lines, and she explained that it's very common, not a genetic concern, and that they'd most likely grow out of it by 2 weeks. I'm currently treating them with saline to flush the eye and clear the crusty bits that form around the eyelids due to the excess fluid being created to combat the irritant. Then gently pushing away the stray curls/hairs with a cotton-tip, and lubricating the eye with basic human eye lubricant (from a chemist). So far so good, the boys are being very cooperative and looking more comfortable. 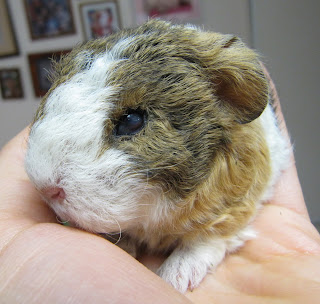 This was Ruby and her little men shortly after I was harassing Rollo and Romeo for eye treatment. She's just the epitome of a perfect mum. So attentive, so chilled out, so loving. (Bit of a contrast to miss Alice, who I watched kick Chloe in the head a few times this morning while she tried to nestle in for a feed. I did however spot Alice chilled out and feeding Cricket and one of Ruby's boys this afternoon! Cheeky little boy! So she is letting them suckle - but only when SHE wants to!) 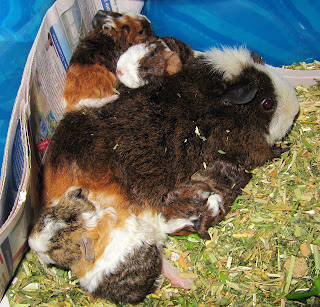 Posted by EmmasBears at 3:51 AM