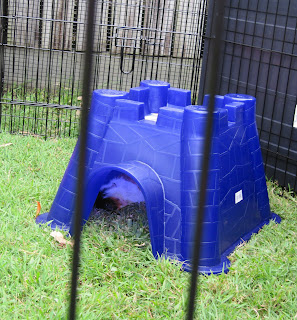 With it getting colder and colder at night here now, I decided to buy the pigs another house/igloo thing to hide in. I found this massive 'small animal castle' at our local pet store. I figured at least 3 or 4 of them could snuggle up in here together.

Alice had other ideas.

She moved in. Claimed it as her space. Had a bit of a lye down and wouldn't let anyone else in! This girl will be challenging Subi for top spot before we know it! 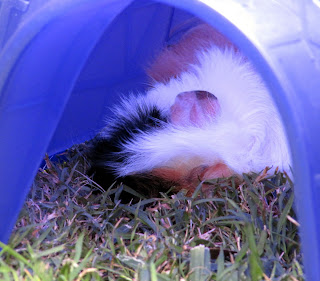 I thought this was a cute photo too. I've been so worried about Oliver (our Beagalier) getting to the guinea pigs that I've been tying him up when I have them on the grass. The last few days I've had the time to watch him though, so I let him be free. He knows not to pounce and run at them. So he's taken to lying down next to the pen and sticking his tongue through the bars. (I have no doubts that he's trying to taste them!). What I find bizzare though, is that the guinea pigs really don't seem worried by him at all. Alba even came right up to him and had a good old sniff before scampering away. 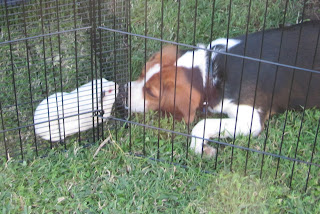 Meanwhile, if I was to even walk near the pen they all scatter in different directions!
Posted by EmmasBears at 2:42 AM