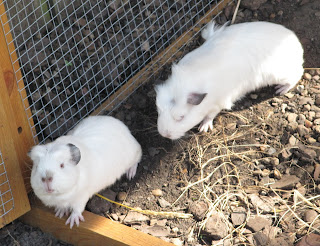 This is today's run down, with the weigh gained since last week in (brackets):

Our porkers for the week are Sprout and Liam! Obviously things have been pretty good out in the bachelor pad this week! And it looks like Sprout is feeling a lot better after his mite treatment on Wednesday too!

I am a little concerned at the weight loss from Beeno, Custard and Subi though. Especially Custard. She's a lot older than everyone else and can't afford to loose any weight. The fact that Subi was less too though makes me think that maybe it was just a time-of-day thing. Last week I weighed them at the end of a day of gorging on veg! Today it was just before lunch time.

Beeno is young though, and should be growing steadily each week. I did notice that her ear is a bit crusty, and am wondering if she has a fungal infection. I'm going to pick up some anti fungal cream tomorrow, and see if that helps things.
Posted by EmmasBears at 3:17 AM