Weight overview for the last 5 weeks 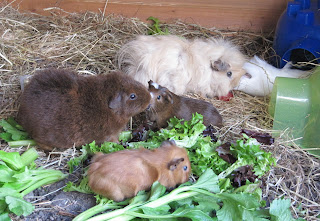 We've had the full 11 guinea pigs for 5 weeks now. 10 weeks since we got Custard back from our friend's place and adopted Alice to keep her company. We've come a long way from two girls in a little cage to the whole gang in the mansion and surrounding hutches!

I was curious to see what the overall weight gain has been like over the last 5 weeks because there was a week there where a few girls lost weight. I tallied it all up last night and between them, the 11 guinea pigs have gained 1.85kg in 5 weeks! That's not a bad effort really. Most of the younger ones have gained about 200g in those 5 weeks. Ruby has been our little porker and has gained 245 in that time. I'm keeping an eye on her as her belly is getting a little larger than you would expect. So I'm wondering if she was impregnated just before she left her last owner as well!? Hopefully it turns out that she's just living up to the 'pig' aspect of her name.

Subi, who actually is pregnant, gained 130g over the last 5 weeks. If she delivers in the next few days that will mean she was about 4-5weeks pregnant when we got her. I am curious to see how much her bubs weigh when they are born too. From what I've read most newborn guinea pigs are about 80-100g. I'm also interested to see how much she weighs when not pregnant too! And here we were contemplating naming her 'fatso'!
Posted by EmmasBears at 2:59 AM