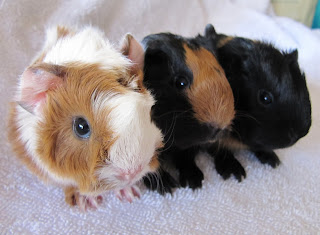 Crumble FINALLY had her bubs! It always feels like it takes so long right at the end - which is my fault really for bringing her inside so early. I was just a little concerned this time round as Sheba is quite heavily pregnant as well, but her pelvic bone hasn't started to open yet which means she still has a few weeks to go. What can happen when two guinea pigs are pregnant at the same time, but a few weeks apart is that when the first one delivers, the smell/hormones/helping lick clean the babies induces premature delivery in the other guinea pig. So I wanted Crumble far away from Sheba for this week. I even predicted last sunday that she'd deliver in the next 7 days - and she did. She just wanted to make it right on 7 days! 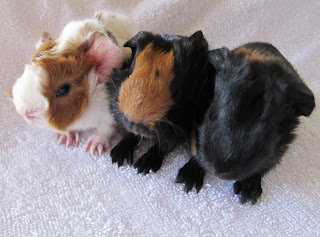 There are two black and gold boys (Mason and Mika) and a little white and ginger girl (Molly). I've popped some close up's of the babies in some other posts below. 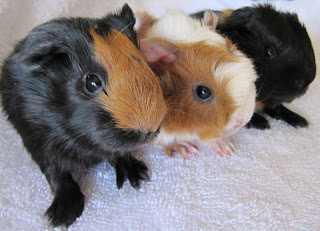 Crumble has handled birth and instant motherhood really well so far. She is a very protective mum, but not too over the top. I relocated her new little family out into the mansion this morning to allow Crumble to show the bubs around while the rest of the girls have time on the grass in the puppy pen. I left Custard in the cage though, as she showed a surprising interest in baby Bonnie a few months ago. And true to form, Custard was right in there with the bubs cleaning them up, and cuddling in next to them. Crumble didn't even seem to mind the interference either. I think Custard would have made a wonderfully mummy. But she's WAY past baby-rearing age now. She'll just have to content herself to honorary Grandma duty! 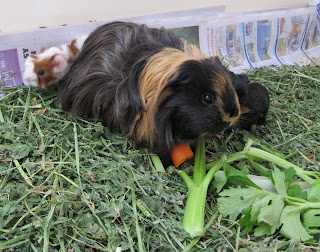 Posted by EmmasBears at 9:14 PM