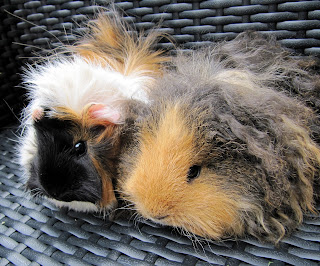 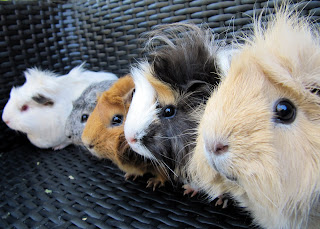 Here's a random fact for you, my guinea pigs almost weigh the same as my 2 year old! :P 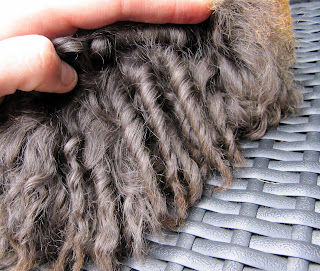 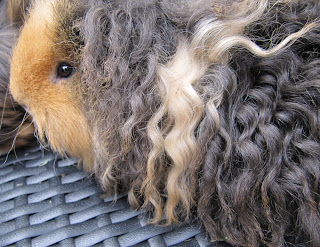 Liam's curls are so beautiful now! The top layer of his fur is a little frizzy, but if you lift that up you find perfectly formed soft ringlets. How beautiful is that!


Crumble and Sheba are getting fatter and fatter. Crumble has a very full belly, with at least three distinct little bubs bumping around in there. While Sheba is a little more compact, and I'd guess that she maybe only has 1 or 2. Or isn't quite as far along as Crumble. I worked out this evening that I've had the two girls in my possession for 57days. According to google the average guinea pig gestation can be anywhere from 59-73 days. So it is going to be very hard to tell if these bubs are Liam's or not! Crumble's pelvic bone is just starting to open, which should mean that she delivers within the next 7 days. Which will also put her due date right in the middle of the gestational estimation!

At this stage all I can do is take a guess at the paternity once the bubs are born. If they look like Liam then chances are they're his. But genetics can be tricky, and they may not look anything like him, but still be his. It's not the end of the world if I don't know for sure, it's more about my wanting to know if he is actually able to produce babies! Alice and Alba lived with him for about a month and there's no sign of wiggly bellies on them! :P A little frustrating as I know I only have a small window of opportunity to get the younger girls pregnant before their pelvis tightens and older pregnancy becomes a death sentence. I know many people have strong opinions about guinea pig breeding, which I acknowledge and understand. But the plan for my girls is simply to have one litter each to reduce the pelvic bone fusing later in adulthood. With subsequent pregnancies a very minor possibility for the following year, and depending heavily on how the individual pigs handle pregnancy/delivery/suckling. Some mum's thrive, some don't. Very much like humans I suppose! 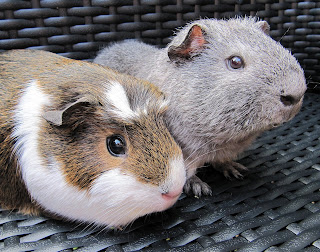 Talking about thriving, Sprout is doing incredibly well at the moment! He gained the most out of ALL of the pigs this week. Even beating the pregnant girls! He even had a little go at making the horny noise to Kobe while I was taking their photo this afternoon. I figure that's a fairly good indication of his well being! Even Kobe seemed happier though, and she's put on a bit of weight too. I am still amazed by Sprout's recovery. I've never had a guinea pig look that sick and then get better again in all of my years of owning them. This little man is a fighter! (in the best possible way!)
Posted by EmmasBears at 4:04 AM