No weigh in this week. 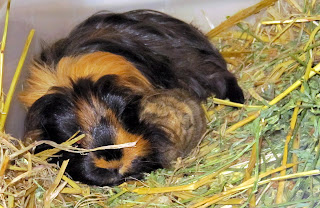 After last week's drama's with three births, and multiple deaths, it was decided that the less contact I had with the main group of girls (especially while hand-feeding/medicating Yeti's boys every few hours) the better. I can't risk transferring pneumonia to the mansion cage - the girls would be wiped out within weeks. At the moment it's strictly feeding via sterilised containers and no lap time/cuddles. A bit sad, but I'm not risking it!

So far so good with little Dante and Dash. I've seen them both suckling from Crumble (shown above having a snooze with little Safari), but Dante still thinks I am his mum.

I've never seen anything quite like it. All I have to do is walk into the room and he's standing on his back legs, nose in the air, squeaking like a maniac and following my every move. I sit next to his enclosure and pull back the cover and he comes sprinting, squeaking all the way and just about tumbling over himself in his hurry to get to me. Usually I'll pop my hand in to give him a boost, and he'll launch himself into my lap. But yesterday he managed to scale the side of the cage on his own and flop head-first into my skirt! It didn't even slow him down... he was frantically chomping on the syringe within seconds.

He has come such a long way from the sleepy, still, dehydrated little baby of a few days ago. I don't know why Dash doesn't do the same behaviour, as he's getting the same amount of contact with me - but he does the normal 'run away' thing when I attempt to scoop him out for a feed.

All I can say is that little Dante has stolen a piece of my heart. I'll try and capture his enthusiasm on film to show you if I can. In all my years I have never witnessed this kind of behaviour from a guinea pig before in my life... he's more like a teeny, tiny little puppy dog!
Posted by EmmasBears at 4:41 AM