The good news: Subi's sore eye from this post is looking great. A couple of squirts of breast milk over the last few days and it's cleared up nicely.

The bad news: Ruby's has gotten worse. Much worse! I actually think the eyeball itself has ruptured... I've popped a pic up, so be warned, it's pretty yucky. The poor little thing is acting perfectly fine (in true guinea pig form!). But we will definately be making a trip to the vet first thing tomorrow. With toddler and baby in tow... not what I had in mind for my monday... thank you very much produce place that sold me crappy straw! 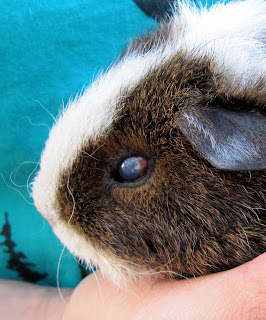 Mind you, I can't blame the produce place entirely. I did see that it was crappy quality - and still bought it. Then I saw just how crappy it was when spreading it out in the cage - but still left it there. So this is just as much my fault.

Oh, and I was giving little 3.5 week old Bonnie a cuddle today and noticed she had a tiny sharp shard of it stuck right in one of her eyes too! Luckily the eye wasn't damaged yet, and I managed to get it out. But that was the final straw for me (pardon the pun).

So the girls have been upgraded to fleece, towels and newspaper! I have no idea if this set up is going to be practical. And I'm a little sad that I have to take away the straw. They really loved burrowing under it. But I think with the addition of a few more hidey things, it will be just as much fun for them. And a hell of a lot safer!

Oh! And - in that same produce shop trip we bought a bail of 'Prime' hay. I went to pull some off to feed the pigs this morning and promptly got a hand full of prickles. On closer inspection the whole bail is riddled with some kind of prickle/burr weed. And the prickles are huge, and sharp. In the photo below you can see a small scattering that I went through by hand, pulling out all of the burrs. That took about an hour! So as much as I hate to waste things, I think this bail is going to need to be binned. The last thing I need is the guinea pigs getting prickles stuck in their mouths!

I had Custard and her 3 sisters for four years without any hay issues. And I used to buy a bail every month and pack the cage full of it!

Anyone else had any experience with a hay product that won't injure guinea pigs!? 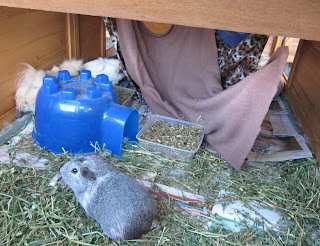 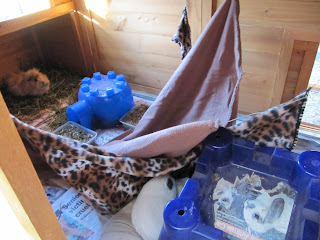 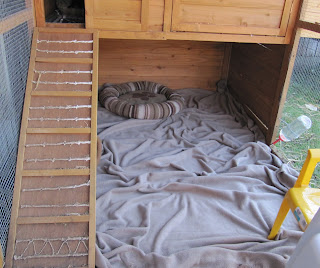 Posted by EmmasBears at 2:27 AM