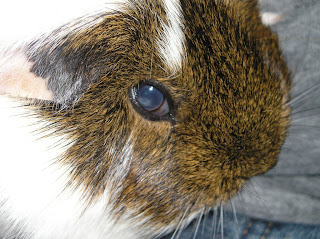 On the weekend we took the kids to the local produce place to buy another bail of hay, some straw and some more piggy mix. The bag of straw we picked up looked a little inferior, but we were in a hurry as kids needed sleeps, so we just paid for it anyway.

When I was cleaning out the mansion on monday, and scattering the new straw down in the lower level (the pigs just LOVE making tunnels through it, and hiding in it!), I got to see just how crap it was! Instead of the lovely big fat pieces of straw we usually get, it looked like it was just the dregs that had been swept up off the floor! All the pieces were short and spiky and there were lots of bits of rubbish - dirt, leaves etc all through it as well. I was a bit pissed off, but it was all I had so I had to leave it. (It was either dodgy straw or dirt!)

This morning while I was checking the girls over, I noticed that both Ruby and Subi had one sore eye each. I am assuming they have had straw-poke incidents, and the eye has gone all weepy and opaque (exactly like the photo above of a piggy called 'Cookie' I found on google). So far it's only those two. I took them inside, checked the eyes for foreign objects and applied some antibacterial eye cream. I have no idea if this is going to help them, or if the damage has been done now, but I figured it was worth a try. If that doesn't work I'll try breast milk. I managed to clear up a nasty case of conjunctivitis in Custard a few months back with a few squirts of my milk! :P Sounds really gross, but it actually works!