Stress in the Mansion! 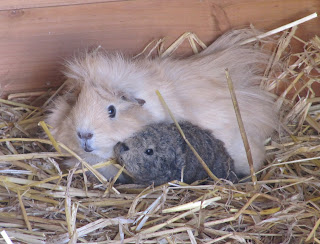 We had a few losses this week, and some quite minimal gains. I'm wondering if Bonnie's birth has anything to do with that? Obviously Subi lost weight, but maybe the addition of a new baby has thrown a spanner in the works for the others as well? Maybe they're all too busy looking out for Bonnie to eat!? Or maybe Subi has been particularly nasty/bossy with the others this week because Bonnie is around?

(Alice, Alba and Liam, and Beeno and Sprout still gained a reasonable amount and they all live in separate cages, so there might be something to my theory!)

So it seems that the mansion may not be the most restful place to live at the moment. Well, for everyone except for Bonnie! The little porker has gained 45g in the last 5 days! Which is nearly 1/3 of her weight at birth. Wow. I suppose life is good when you're the sole baby of an over-protective (guinea pig) mumma! And when you have 5 other girls to wait on you hand and paw!

The top photo is Custard on 'baby sitting duty' while Subi and the others went outside to eat grass! Instinctively Bonnie stayed behind and buried herself in the straw making little chirping noises. I watched as Custard went back inside the cage and sat with her, cuddling up to her and gently nudging her to the corner to sit down. Pretty extraordinary behaviour for a piggy who's never had a litter before! 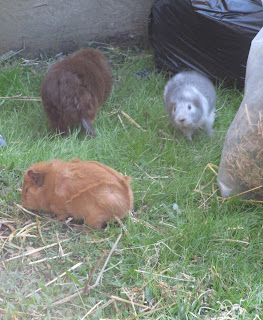 Posted by EmmasBears at 8:50 PM