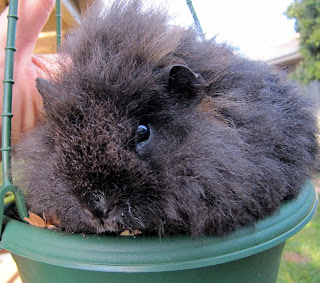 Yeti is by far my most unusual guinea pig. And by far the most challenging to photograph! Especially as she is not just black. She has that tiny bit of white on her nose, and a hint of chocolate by her ear... just enough to throw off my camera!

She is packing on the weight at the moment too which is awesome to see. And I think the illusion of her size is increased due to all that fur! It just explodes in every direction with cottony-wooly-puffy goodness. 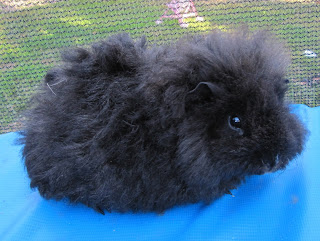 She's a bit of a loner personality-wise though. She tends to be found having a snooze on her own in one of the igloos, perhaps avoiding confrontation with the bigger girls? But she handles being caught and cuddled a lot better than some of the others (the worst at this is probably Ginger! She has a wiggle technique that makes it ridiculously hard to hold onto her!). She has an appetite to rival that of the bigger girls too. She's always right there at dinner time, right in the middle of the food. Usually sitting on something someone else wants to eat! 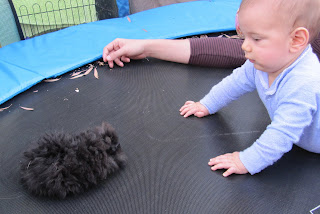 I was showing some of the pigs to my hubby and bubby Byron this afternoon while they had tummy time on the trampoline. He was blown away by her crazy hair too. (He doesn't see them every day like I do). Byron was only mildly interested in the little black ball of fluff. I handed the heavily pregnant Crumble to hubby to hold while I took Byron for a moment. He was amazed to feel the babies moving around in there. And not the least bit worried about it. Yet, when I was pregnant it freaked him out to feel the kicks and rolls! Go figure hey. Pregnant guinea pig = OK. Pregnant wife = freaky! 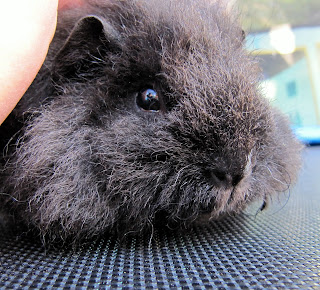 Posted by EmmasBears at 4:56 AM