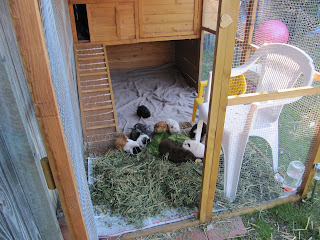 What a huge day! I am exhausted. Monday's are clean out day, and with the relatively new addition of the fleece bedding for the mansion pigs, this becomes a huge task. Today was extra busy as Sprout needed a visit to the vet (he's not eating and has a number of cyst-like lumps under his neck), and Chelsea wasn't very well either!

(2am feed for Byron)
Wake at 5:45am - feed byron, dress byron, shower, make breakfast
7:00am - Byron back to bed, put a load of washing on, check emails
7:45 - Byron and chelsea awake. Chelsea has nasty cough. Make bottle and breakfast for chelsea. Ring vet for appt for Sprout. Take out washing, put on another load. Google cough syrup for 2 year olds.
8:45 - Byron getting grumpy, attempt to put him back to bed.
9:15 - Byron still crying. get him out of bed. put him, chels and sprout in car. Drive to shops.
9:20 - Pop into pet store. enquire about 20kg bad of guinea pig mix. Still not in despite telling me it would be in last week.
9:30 - Buy cough syrup at chemist
9:40 - Buy lunch/dinner provisions at coles.
9:45 - Bundle kids back in car, drive to vet
9:50 - Bundle kids out of car and into pram, balance sprout in box and push everyone up the ramp to the vet
9:55 - Sprout is examined by vet. definatly emaciated. Lumps on neck are apparently enlarged glands. Might have infection in this throat. Given antibiotics and energy paste.
10:15 - Bundle everyone back to car after paying $70 for third vet visit in a month.
10:25 - Back home. Quickly feed an exhausted byron. Put him to bed. Give sprout some energy paste.
10:45 - Take two washed loads of clothes to clothesline. Re-position grass run for girl pigs. Weigh 11 girls and put them in grass run. Start cleaning cage (remove dirty fleece, pull up soggy towels and bin used newspaper. clean out hidey houses/ cuddle sacks). Hose down dirty towels and fleece. Soak dirty cuddle sacks. All the while managing chelsea as she follows me around winging. 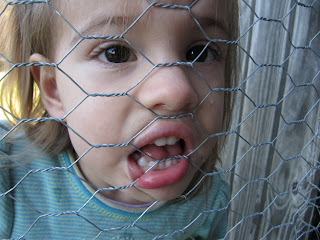 12:00pm - Go inside for lunch. Give Chelsea some cough medicine.
12:30- put Chelsea down for a sleep, Byron wakes. feed Byron - milk and solids. Put on another load of washing. Play with Byron. Change two of his pooey nappies. 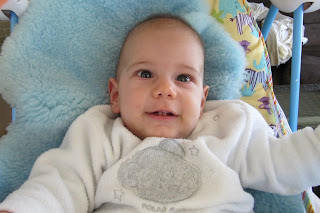 1:30 - Put out load of washing. Start putting new fleece back in cage. Chelsea wakes. Play on the trampolene with both kids for 5mins, until chelsea's bouncing gets too rough. Relocate Byron to his chair. Continue setting the mansion back up. Sort through more hay to remove prickles. Head around side of house. Clean out Liam's House and Sprouts House. Weigh Liam, Crumble and Sheba. Fill side hutches with sorted hay and veg. Pacify Chelsea as she follows me around with a bottle of poster paint and a paint brush. Put Liam and girls back. Feed Sprout some more energy syrup and antibiotics. Put him and Kobe back. Put side gate back on its hinge after chelsea slammed it a bit hard. Lock side gate. 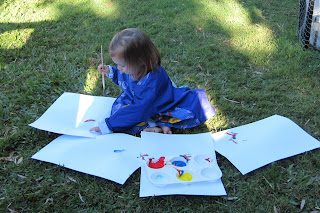 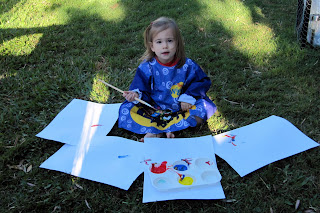 3:00 - Put Byron to bed. Change chelsea's pooey nappy. Put on her painting smock. Set her up with paints and paper. Put girls back while she paints. Take some photos of newly cleaned cage to have something to show for the day's efforts. Take dry clothes off the line. Put forth load washing on. 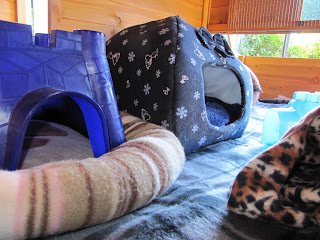 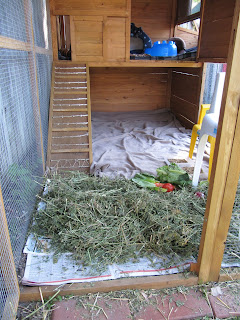 4:00- Byron awake. Put out last load of washing. Close up girls for the night. Feed the dog. Pack up painting stuff. Take photo of art work for future reference. Give chelsea a snack. Sit down to reflect on the craziness of the day. Decide to document it in this blog post. 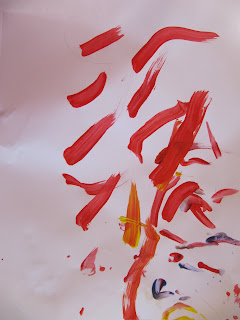 4:30 - Mark comes home. Mediate fighting between Chelsea and Byron as they both try to sit in my lap at once.
4:45 - Byron back to bed. Mark heads back out to buy some juice and a chap stick for my extremely dry lips. I start cooking dinner. Chelsea does her best to make cooking dinner impossible.
5:15 - Cut thumb while making dinner. Mark gets home again. Put band-aid on bleeding thumb.
5:20 - Eat dinner. Feed Chelsea. Try to minimise amount of Chelsea's dinner that ends up on the floor.
5:30 - Shower Chelsea. Dress Chelsea in her PJs, try not to bleed all over her clean clothes.
5:45 - Byron wakes. Feed Byron - milk and solids. Change another pooey nappy. Shower him. Dress him in his PJs (again avoiding the blood!). Put away washed clothes. Mark makes Chelsea a bottle.
6:30 - Make Byron a bottle. Put Chelsea to bed. Feed Byron his bottle.
7:00 - Put Byron to bed. Eat LOTS of chocolate! Inspect hands that are so dry and cracked they feel like sandpaper. Thumb has finally stopped bleeding. Decide not to do washing up as thumb will definitely start gushing again. Upload today's photos to computer. Finish blog post. Breathe. 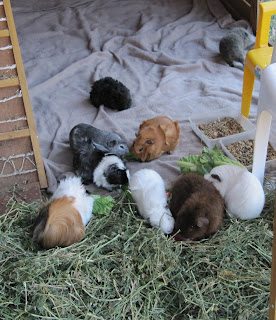 And lastly, the rather unimpressive weigh in:

Well, we had a crappy week this week! I wonder what went wrong. I've felt everyone else's necks for lumps like Sprout, but he's the only one with them. He's also the only one that has the emaciated feel and the generally unwell look. Hopefully this isn't something contagious that is just starting to hit them all... I'll keep you all updated as the week progresses. Finger's crossed it was just a one-off bad week.
Posted by EmmasBears at 11:07 PM