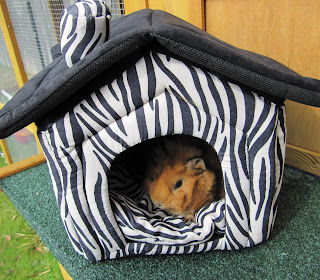 Total piggy weight 12.075kg (total weekly gain of 360g across 16 guinea pigs, which is just over half of last weeks gain or approx 22g per pig)


Everyone did pretty well this week. I am so relieved to watch Sprout slowly put some weight on. It seems crazy to me that he and his sister Sparrow can be so far apart in size, yet both had the exact same start in life. There was a second curly haired bub in the litter adopted by someone else. I wonder if that pig has had similar health issues, if it was linked to the curly gene, or if Sprout was just the runt?

Sheba was feeling particularly pudgy today too. I'm 90% sure she's got some bubs in there too. She's not as fat as Crumble, but definitely more fat than just blubber. So looks like she may have been knocked up before she came to live with us too! It will be nice for the mum's to have their litters together, and good for the babies to have other's to run and popcorn with. I'm very excited.

And the picture for this weeks weigh in is Ginger modelling the cozy house I bought for the pigs from the Cavy Cottage. It comes with a cushion insert, but I ended up taking it out and cutting out the bottom off after some destructive pigs decided to try nibbling the lining! It now lives in Sprout and Kobe's cage, helping to keep them extra warm at night.
Posted by EmmasBears at 3:42 AM