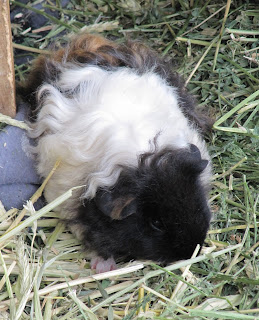 Two months ago, I was lucky enough to be able to give 5 beautiful sisters a new home here at the caviary - Tigerlily, Twizzle, Ivy, Zinnia and Demi. Demi has since moved out with Sheba to live with an incredible family in C&C cage comfort. But I thought I'd take some updated pics of the remaining 4 sisters. Above is Tigerlily, the only sister with the long, soft curls. She's looking stunning, and I actually have trouble telling her apart from my pedigree texel Jasmine sometimes. (Tiger's curly bum is shown below) 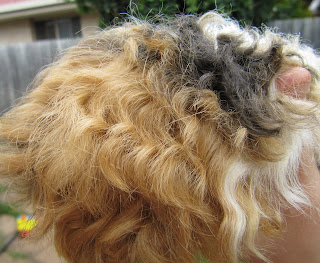 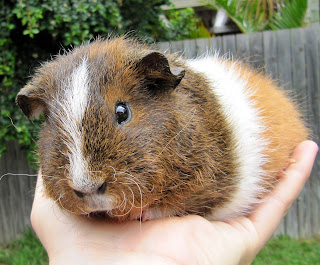 This is Twizzle, rex crossed with a texel x, but she looks just like a rex! The longhair gene is recessive, but from what I understand, only partly so. It appears to be possible to have an animal carrying both the short and long haired gene and be completely short haired as expected (like Twizzle), but you can also get bits of long hair showing up on the rump (like this girl), or even a coat with a bit more length than usual - (mid-length). It seems to depend on just how the genes interact with each other, and the other genetic markers. All very fascinating stuff, but is really just my convoluted way of saying that even though Twizzle and her other rex-like sisters have a recessive long-haired gene - you wouldn't know by looking at them! One of the joys and mysteries of guinea pigs! 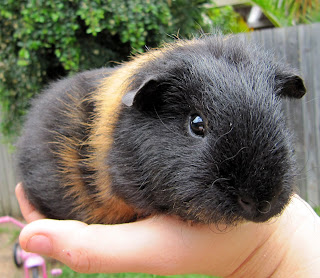 This is Zinnia. Also very rex-like - but with a slightly different texture. Not sure what's happened genetically here, but it feels like she's gotten the softness of the texel coat, but the length/crimping of the rex coat. Her fur isn't as 'springy' to the touch as a normal rex, but I don't know if this is due to the lack of roughness, or due to the difference in the kink/curl? 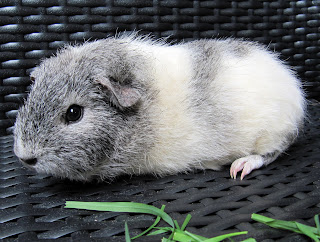 And Miss Ivy - Very much like a classic little rex here! 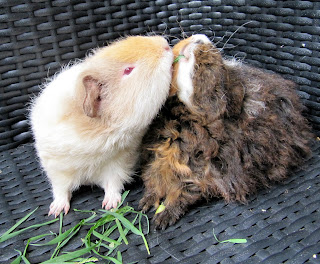 Oh, and I just had to include these pictures of Lavender Mist and Romeo. They've become quite good friends, and make such a handsome pair. Both incredibly gentle and relaxed piggies. 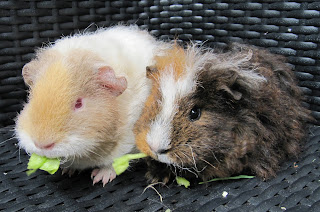 Both of these two appear to have the mid-length coats. I know Romeo's genetic background (Very basic breakdown: 3/4 texel, 1/4 rex), but Lavender's is a bit more mysterious. Her parents weren't even curly haired, so somehow both the recessive curl, and a touch of longhaired genetics have snuck in there too!

You can see on the side-profile picture of Lavender, how the curls on her rump are a lot longer than the fur at the front/over her shoulders. This seems to be both a really common appearance in both the mixed long/short haired pigs, and also the curly x long pigs. Delilah also shows the same coat-length difference from shoulder to rump. Where Lavender's coat is soft and wavy (like a shorter texel), Delilah's is course and crimped (like a long-haired rex). I wonder if we have two different 'curl' genes at work here, or if the difference in the coat texture comes back to the short/long hair genes interacting differently in different animals!? So many questions to answer... lol 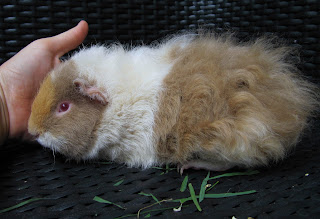 Posted by EmmasBears at 3:54 AM