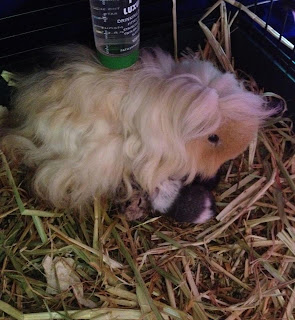 Xeraphina's litter has been muchly anticipated around here. We were expecting a litter of curly bubs. But that's not what we got!

She went into labour at about 3am on Tuesday morning (23rd October). I heard the squeal and popped out of bed to check her ( my pregnant girls sleep next to my bed at night when they're close to delivery so that I don't miss anything. Some girls give birth so quietly that I sleep right through it - others, like Xeraphina, could wake the dead with all their noise!)

By 3:15am the first bub had arrived. By this stage my 3yr old daughter Chelsea had woken from the commotion and joined me sitting next to the cage to watch the miracle unfold. First born was Teenie, next was Talbot, third was Tamsyn and last was Taffy. Once I was sure Xeraphina had finished, and was just cleaning her bubs we left her be and Chelsea and I went back to bed.

I hadn't even thought to check their coats at this stage - I didn't expect anything other than curls, and all bubs look a bit curly when wet. But the next morning it was very clear that this litter were all straight-coated! 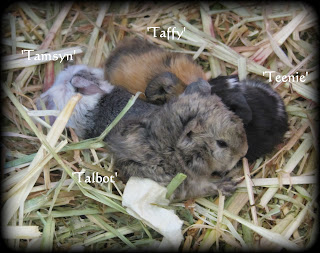 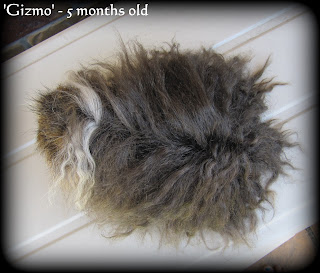 These are some photos I managed to take of Gizmo the morning his bubs were born as well. There is no denying his curl. And there is no doubt in my mind that he was daddy to the bubs. He and Xeraphina have lived in an exclusive relationship since July, never parting each others sides until I felt the first movement from Xeraphina's bubs. 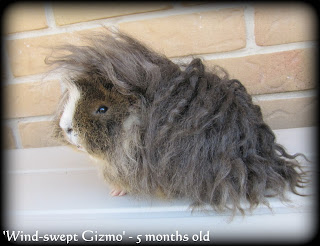 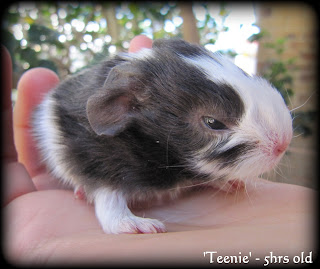 So these are the little guys we got. Teenie will be sheltie coated. 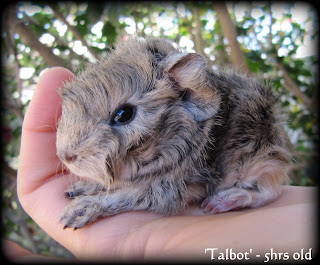 Talbot will be peruvian/sheba looking. 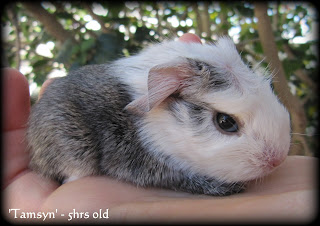 and Tamsyn and Taffy will be coronet-looking.

Usually when a curly guinea pig is bred to a curly guinea pig, the only option for the resulting offspring is curl - as this gene is recessive and is all the parent animal has to pass on to their bubs. The fact that we've gotten straight coated bubs in this pairing means that the gene giving Gizmo his curl is genetically different to the gene giving Xeraphina her curl. I had heard of this happening occasionally through Australian guinea pig breeding urban-legends, but have never seen it first hand.

This has left me a little stumped though, because if Gizmo's curl isn't genetically compatible with my other curly-coated sheba looking girls... then it puts a bit of a further challenge into my curly-sheba breeding program. We will need to do a little more testing, and try Gizmo with another curly girl of different lines, but I suspect the result will be the same. Maybe we'll end up with two different curly sheba lines?! lol 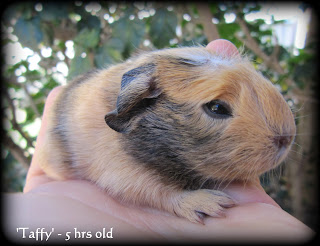 Posted by EmmasBears at 3:53 AM