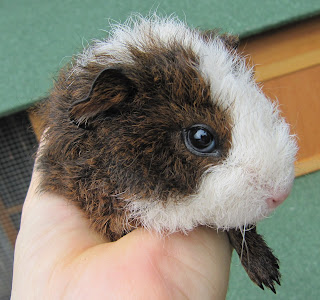 I did my same old trick again this morning. I browsed through the 'guinea pigs for sale' listings online and found an ad for a 'texel female' only 10mins drive from my place.

I HAD to have her.

The owner was fantastic, and we organised for me to view her within the hour. I bundled up Chelsea (left Byron with Mark) and went to check her out. The property was amazing, and I have never seen so many guinea pig cages in one backyard before! The little texel girl was very sweet, so I agreed to take her. Apparently her mother was an expensive pedigree, but the lady who bred her never handed over the papers.

I decided to call her Ruby. Mark's not keen on the name, but I think it's perfect. Her hair is kind of like a cross between a rex and a texel in my opinion. Liam's is thick, and lush and soft - like I expect a texel's should be. Ruby's is more of a wiry fur, not quite as thick, and no where near as long. So it will be interesting to see how she grows.

I also decided to weigh all of the pigs today. It will allow me to keep an eye on their health, especially as most of them are still bubs themselves.

(this is probably really boring for you, but will be a great record keeping device for me! :P) 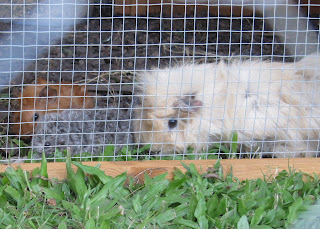 Posted by EmmasBears at 4:36 AM