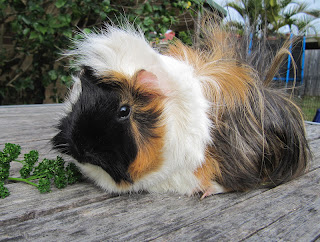 Our beautiful Alice was getting closer to her due date, and her belly was getting rather rounded. But she wasn't dilating yet, so I hadn't been watching her as closely as I normally would have. If I had ignored her pelvis dilation and just gone with my dates, I might have caught her delivery, and we might have been able to save two of her FIVE babies!

As it was I didn't find her until the babies had all been delivered. She must have gotten a little fixated on the first born bubs and only half-heartedly cleaned the two bubs that didn't make it. They were perfect, just had a little piece of the membrane over their faces. Both were dark-eyed whites, one looked like she had curls, the other an aby coat. There was nothing I could do though, as they were long since passed. 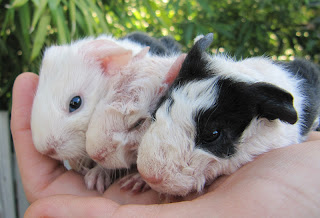 The remaining three bubs were wobbling around and looked ok. One was a lot smaller than the others, and I had a feeling that it would be touch and go for her.... This was the three bubs on the afternoon of the 31st, the day they were born. 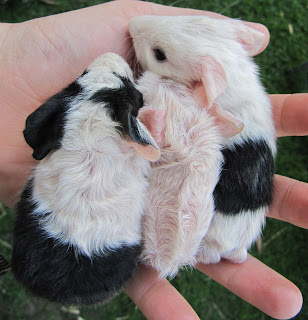 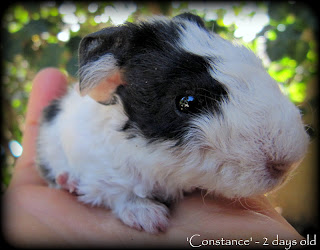 I finally named the bubs on their second day, but sadly the littlest lady (Cheche) had passed quietly in the night. The remaining bubs, a black/white/roan curly girl is 'Constance', and the black/white/chocolate roan boy is 'Cuba'. We now hopefully watch them get bigger and stronger.... 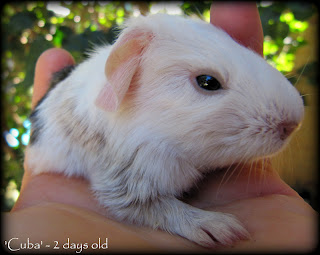 Posted by EmmasBears at 9:07 PM