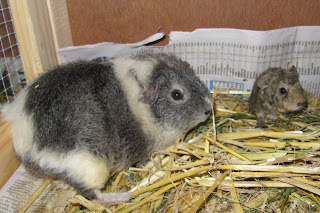 I had been expecting Ivy to deliver her baby all day yesterday, following Xeraphina's birth yesterday morning in the cage above her (the smell/pheromones/something about the birth of one guinea pig mum often sets of any other pregnant mums in the area), but she held on to that bub all day. I said goodnight at about 10pm last night, expecting to find a new addition this morning.

And we did! One gorgeous little lady we've called 'Posy'. 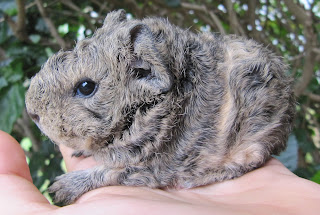 Posy weighed in at at very reasonable 95g. I had been a little concerned that she was getting too big in there, being an only baby!

She's a lemon agouti (black base, lemony ticking and a lemony belly) with the classic thicky curly coat that could either go the way of the texel or end up more like a fluffy rex. She is technically 3/4 texel though, and my last litter of 3/4 texels all ended up with long curly texel coats, so I'd say this is what we can expect. 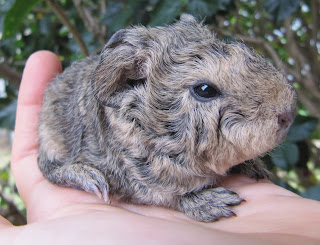 This is Posy posed next to Verity from Xeraphina's litter born yesterday morning. You can see just how similar these two half-sisters look! Same colouring, same curls. Only Verity has the merino crest. 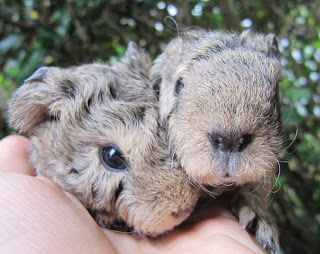 And this is Velvet (also from yesterday's litter) next to Posy. These two girls are both texel-coated, but Velvet has the darker 'cream agouti' colouring. 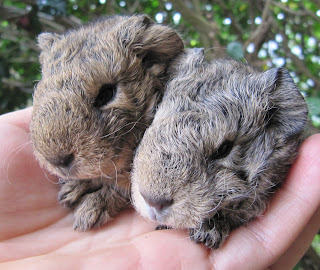 Posted by EmmasBears at 9:38 PM