I was a guinea pig midwife again this morning. The first bub arrived without incident. She was strong and up and standing while mum cleaned her off within minutes.

It took a bit longer for bub no. 2 to arrive. And a bit of effort from mum to bring her into the world. Mum completely ignored her when she arrived, and I must say my first thoughts were 'what is different about this little one?'. I lifted her up gently and it became very apparent... this girl had a serious deformity.

My first thoughts were for the baby's long-term prognosis. I checked her over to see if there was anything that could be done/just what we were dealing with. It looks very much like she has her partially formed twin attached to her hip. There is an extended bone in the mass, which is attached to a perfectly formed back foot which she can wiggle - but has no use of. The mass is nearly the same size as her, and appears to have some muscle tone and some fluid. It could also be a tumour, but with the presence of bone/muscle - it seems more likely to me to be the conjoined twin situation. 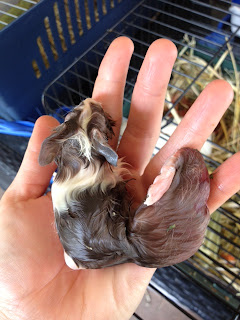 I have never seen this before in all the decades I've been breeding guinea pigs.

The parents were not related (with both being pedigree I can see their ancestry back 5 generations to confirm this), so it appears to have just been a bit of bad luck genetically - this could have happened to any two animals. Conjoined twins occur when a single fertilised egg splits into two separate babies (usually seen as identical twins). When this split doesn't quite fully separate, you get conjoined twins of varying degrees. Sometimes you get two fully formed babies attached at one point on their bodies, and sometimes you get a fully formed baby with a partially formed twin. This is a partially formed twin situation.

There is not a good prognosis for this little one. She cannot stand/walk due to the placement of the mass. The sheer weight of it means that she's pulled over again when she tries anyways. Her tiny newborn heart and lungs will be working overtime to support the extra body mass as well. And we don't know what internal deformities she might also be suffering from unseen.

I have only posted this as an educational tool for other breeders who may have faced/be facing a similar situation. From what I have determined today there is no other information to be found on conjoined guinea pig babies online. Lots of information on poly-dactyl (extra toes/deformed hands/feet etc), but nothing quite as severe as this. 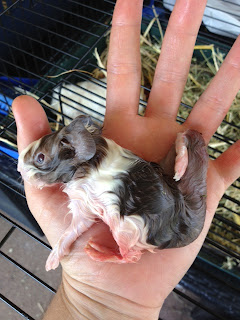 Posted by EmmasBears at 3:00 AM