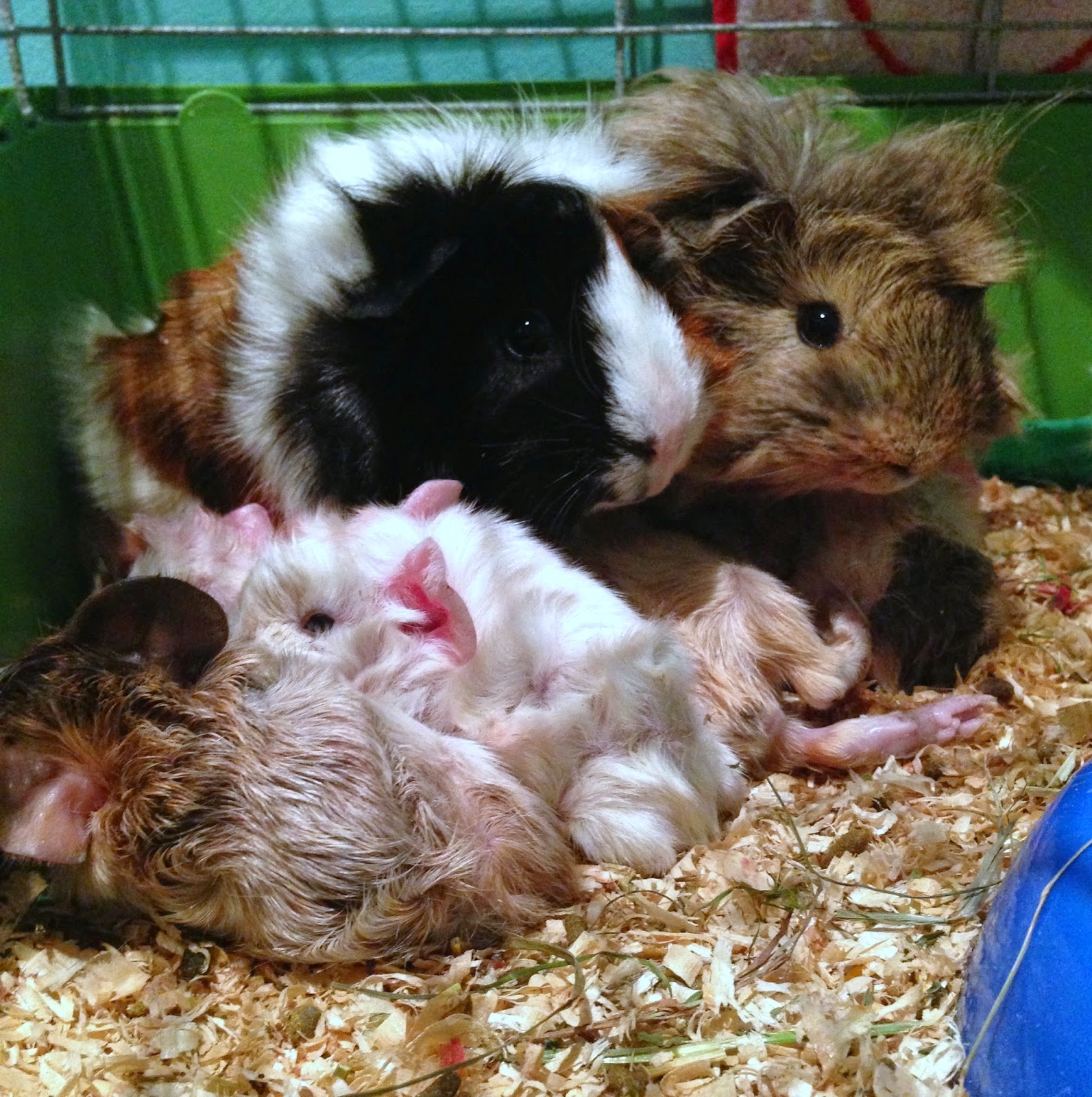 Both Abby and Buttons were pregnant to Boris, and showing signs of being due at a similar time. I thought it might come down to their deliveries being maybe a day or so apart, but as the week drew on and they both dilated at the same rate I realised that they were very likely to deliver on the same day. Or at least as soon as one went into labour, she would most definitely set the other one off as well.

And sure enough after watching the girls like a hawk in the comfort of our airconditioned lounge room, Abby gave a sqeak and we knew it was all systems GO! I had been checking for fetal movement about an hour earlier as she was looking very uncomforable, and had estimated at that stage that we were in for a litter of 4-5 bubs. And sure enough Abby effortlessly and without any complications delivered 5 little boars. The only intervening we needed to do was to gently push the first born bubs out of the way of her sitting motion while she delivered the next one. The newborns instinctively want to crawl to mum and snuggle under her, but while she is leaning back on her rump and delivering the next baby she doesn't really care who she is crushing in the process!

Buttons was very aware of what was happening, and helped lick a few of Abby's bubs, but seemed a bit over excited. She started grooming one of the younger girls (6wk old Mary who was in there because she was too little for the outside cage) in her enthusiasm! 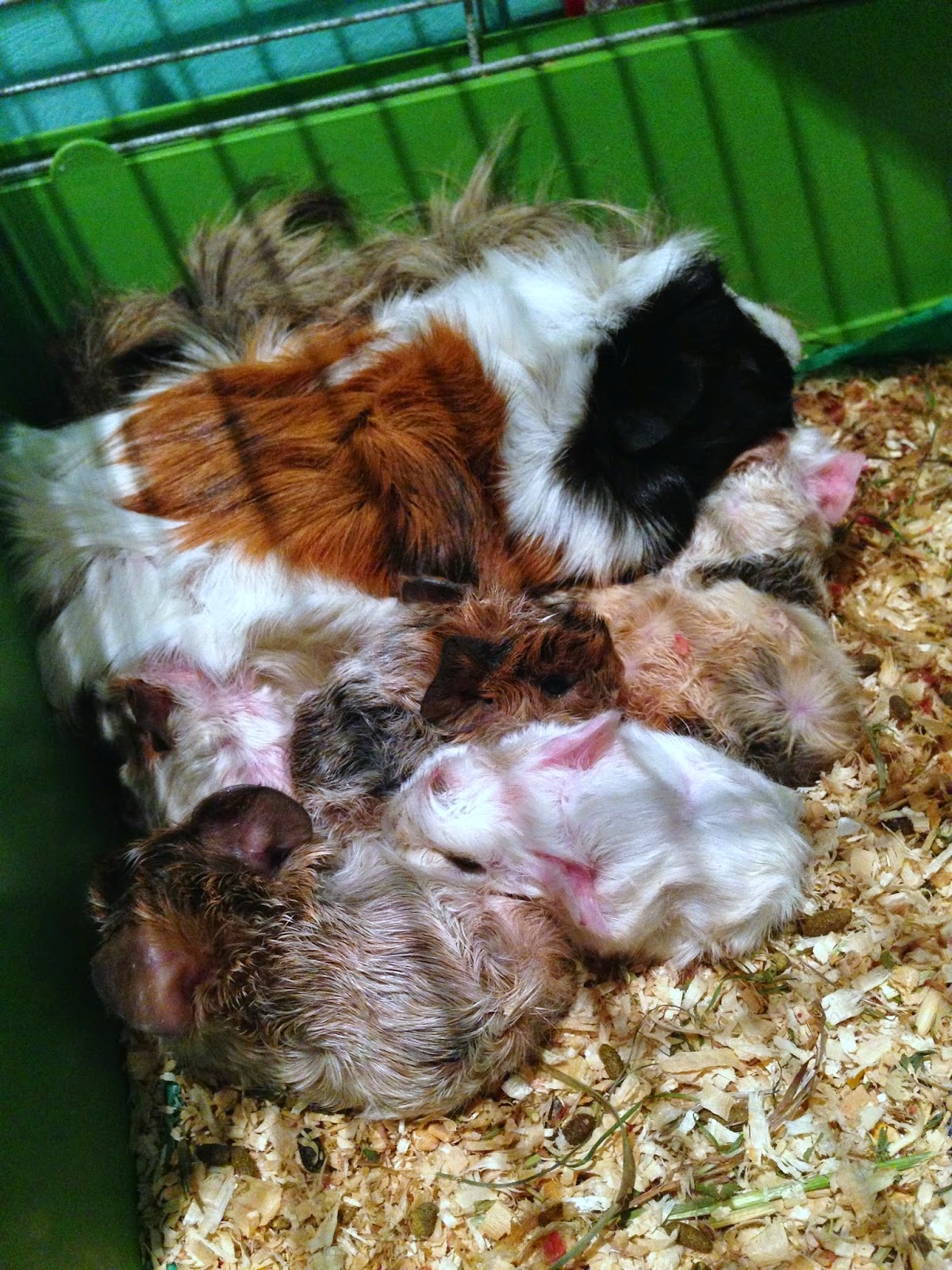 Within about 30mins Buttons was delivering her litter as well though. It's not always quite that quick, so I didn't fully believe my 5yr old when she came to tell me Buttons was having babies too! But in the few minutes I left the side of the cage Buttons managed to also deliver without complication. Two HUGE babies. A 155g boar and a healthy big 102g sow. In comparison to Abby's bubs (the largest of which was only 80g, the smallest 48g), Button's two seemed like monstors.

Both mums positioned themselves ontop of the pile of newborns and set about systematically cleaning and licking and feeding each of them. Even the tiniest of the litters got a look in. This is one of those times when I'm really thankful for the way things have worked out. Having both girls due so close together has been a godsend. Abby would have struggled to care for 5 babies on her own, but with an extra mum and extra milk all 7 babies are doing really well.

They're not out of the woods yet. I want to seem some steady weight gain before I'll relax. But they are all bright-eyed, running around after the mums and annoying the 6wk old girls no end! (think of 6wk old pigs as pre-teens. They think they're pretty grown up, but they're really just big babies themselves!). 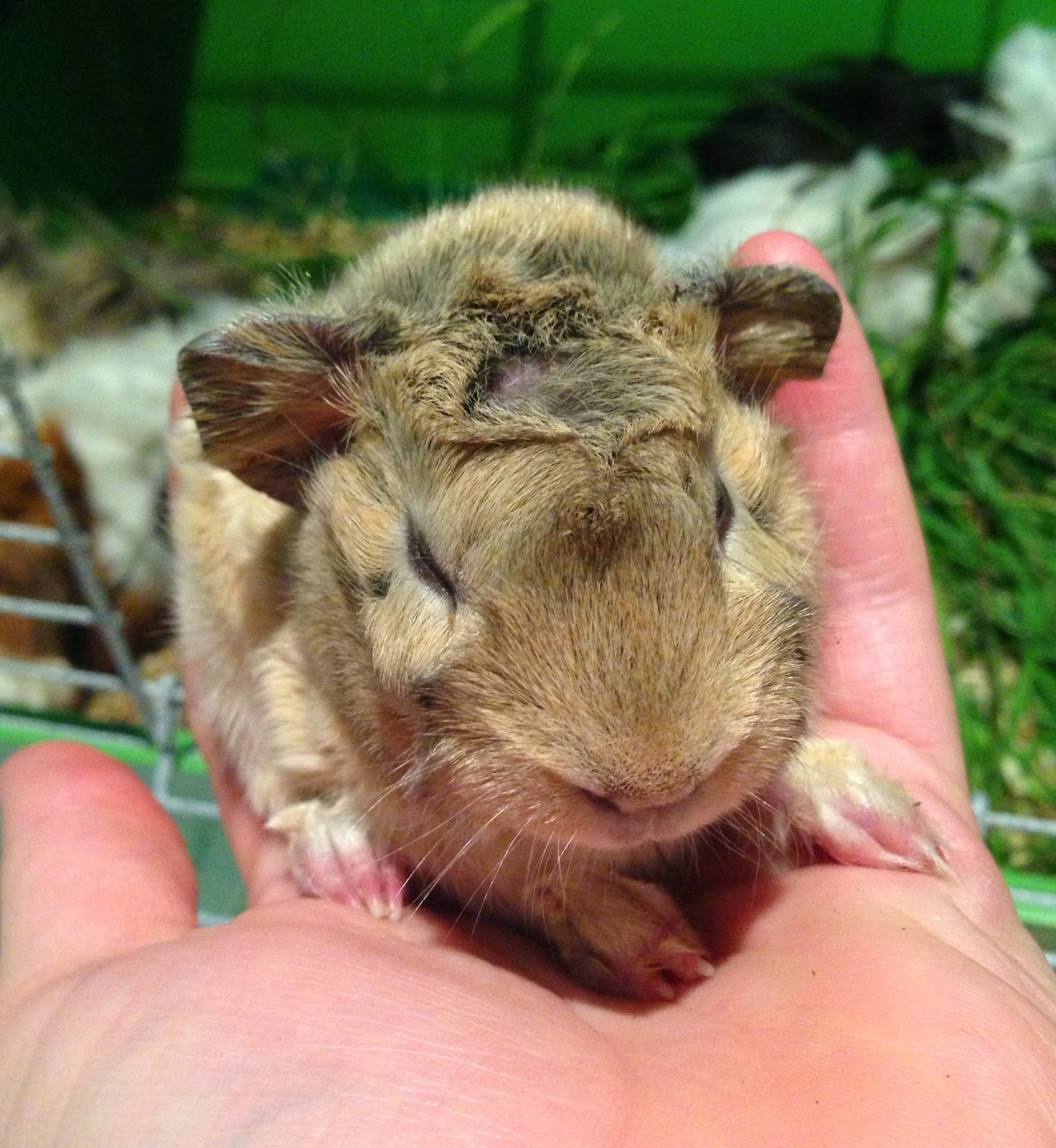 This is the big 155g boy. My daughter has fallen head over heals in love with him and has called him 'Axel' (I think after a boy in her preschool class! lol). In the photo below you can see a size comparison of Axel next to one of Abby's smallest bubs. The photo does not do the size difference justice. Axel is all blubber and fat. The little bub is all limbs and ribs!

It's fascinating how different circumstances can bring about such different birth weights. Both mums lived in the same conditions throughout their pregnancies and were offered the same foods. Abby's bubs had to share the nutrition she was able to consume amoung the 5 of them, while Buttons only had to nuture 2 passengers. And even then, Axel somehow managed to score more then his fair share of the nutrients! I wonder if this means he'll naturally be a larger pig as an adult? Or if the size will all even out as the boys grow? 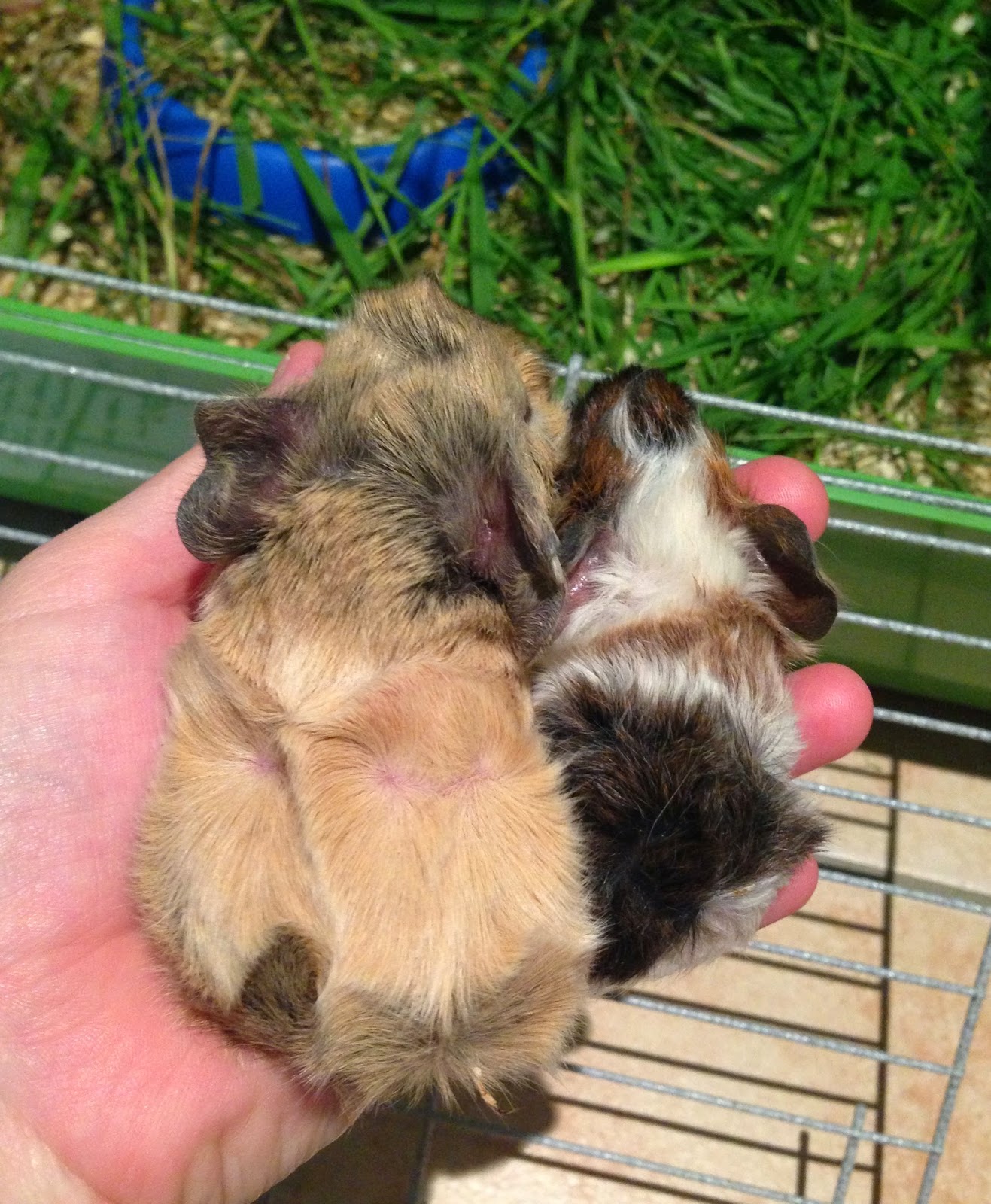 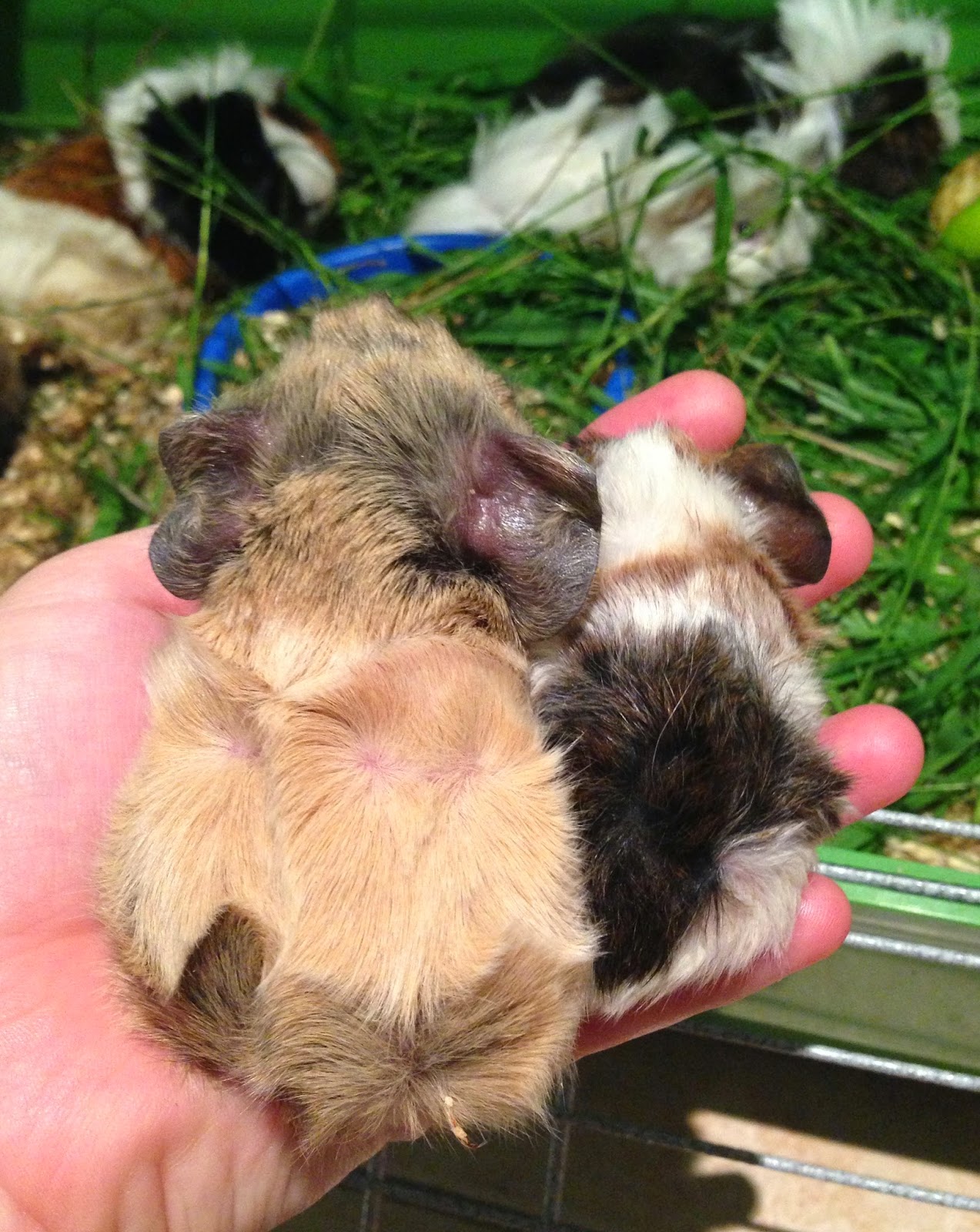 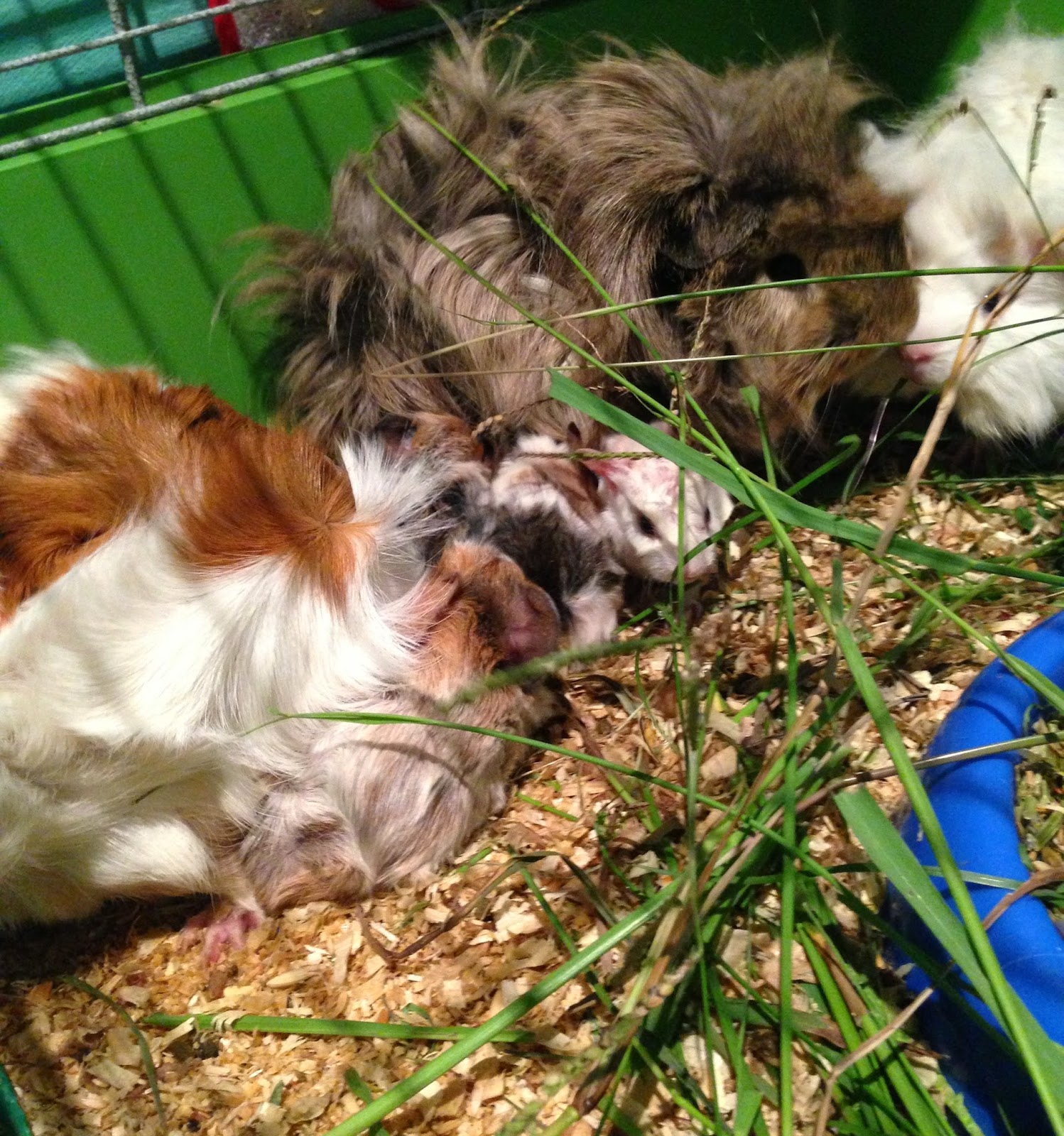 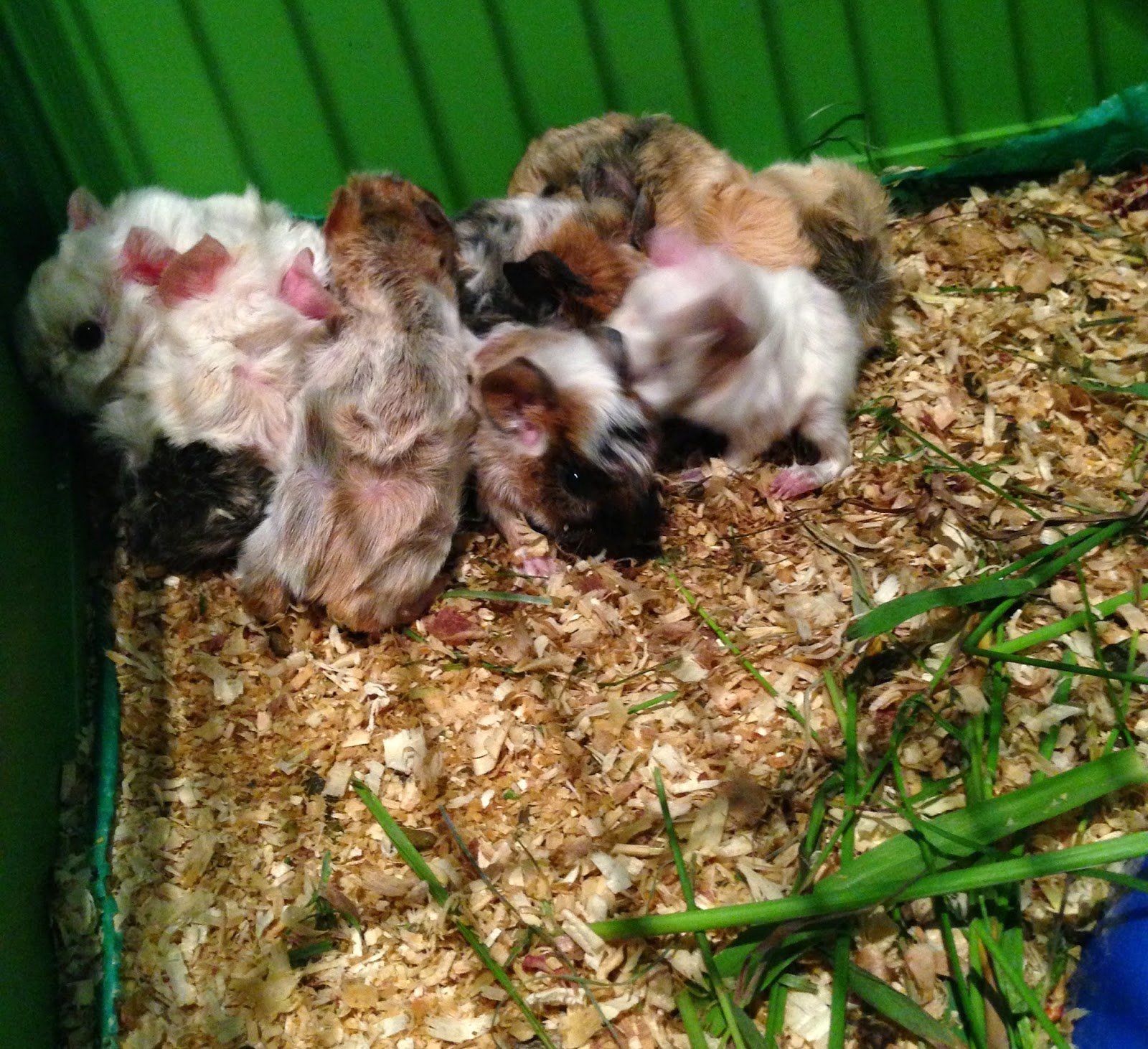 Some individual pics of the bubs below. Not all of them have names yet, so feel free to share any suggestions you might have :) 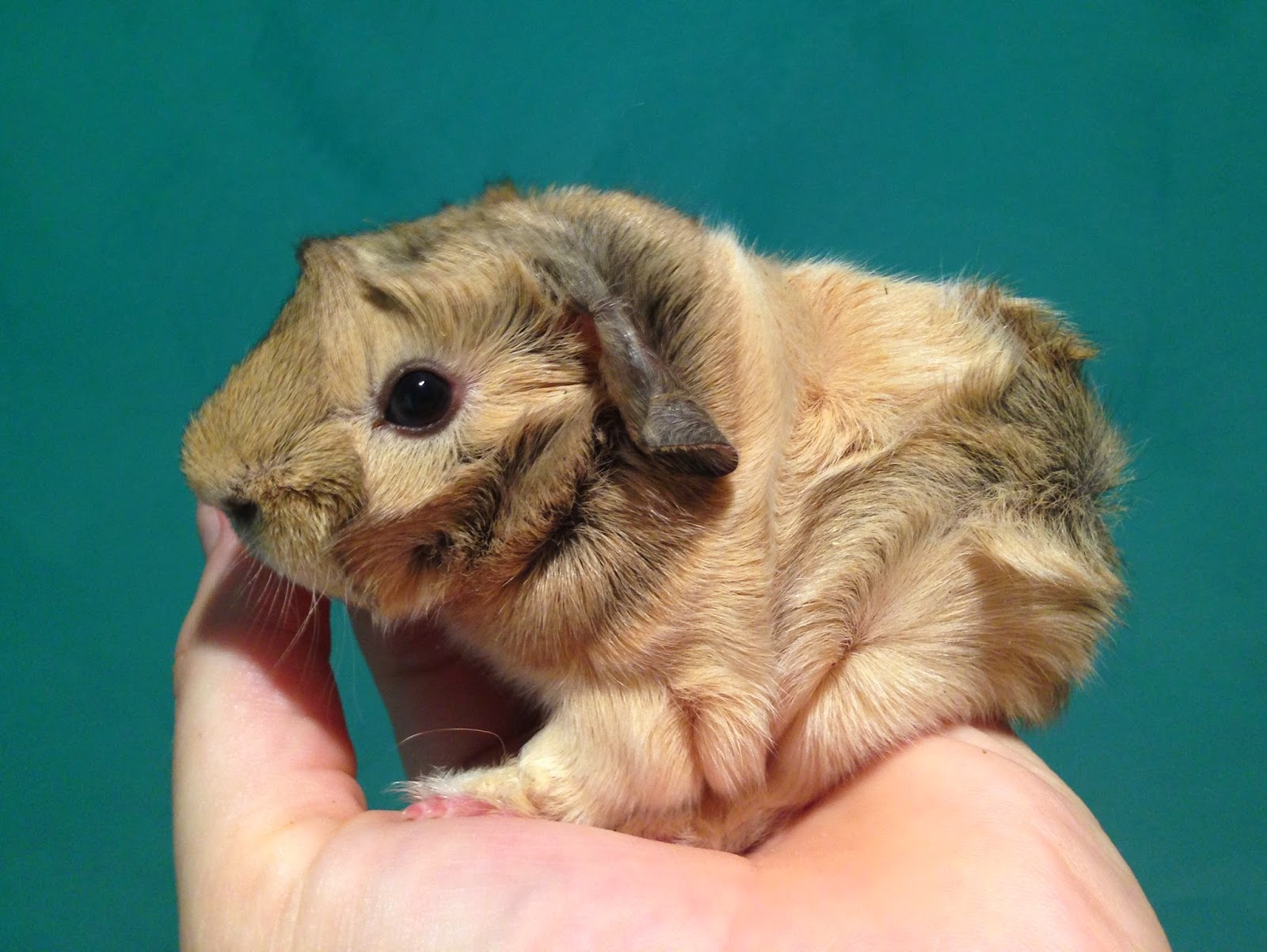 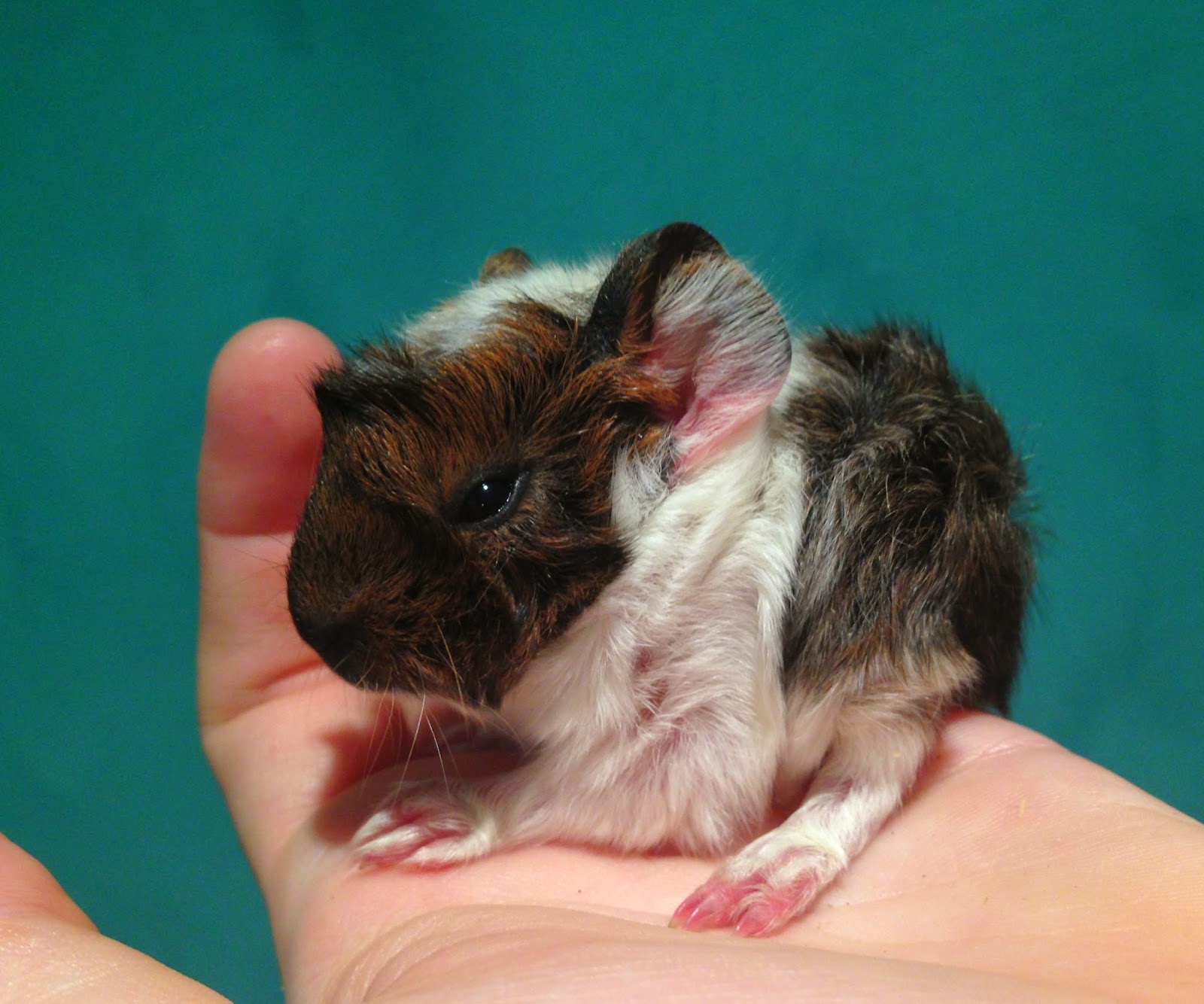 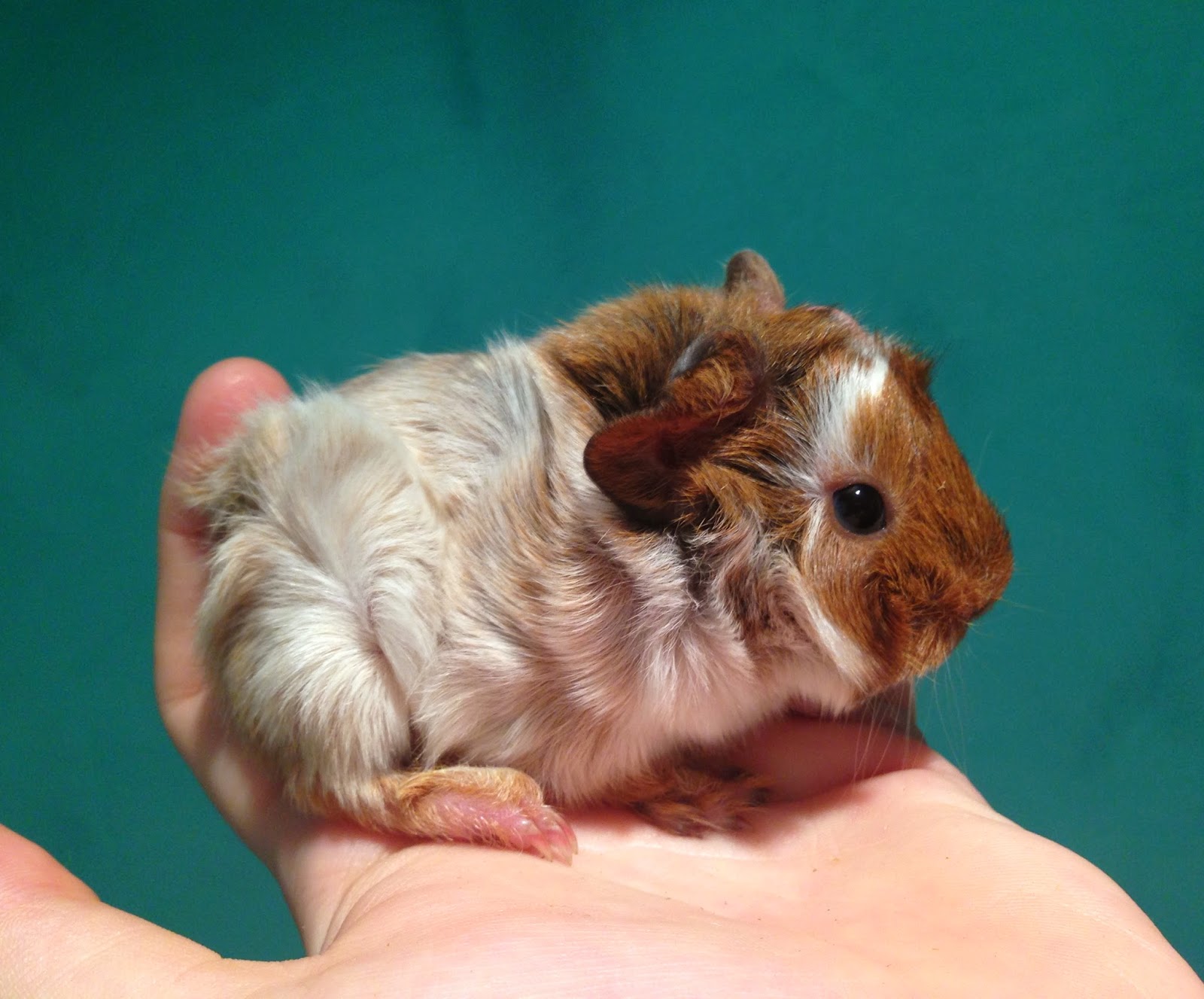 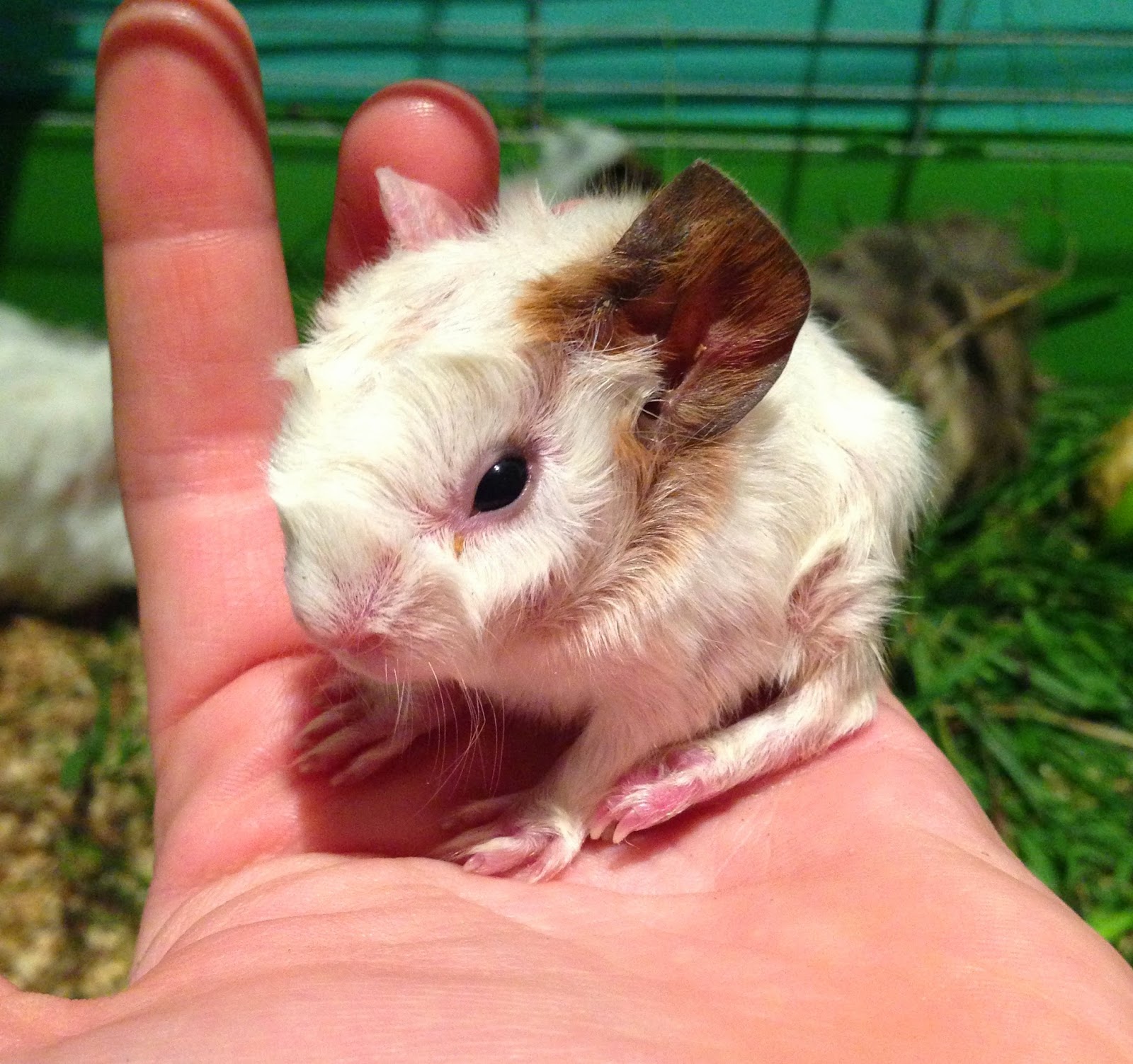 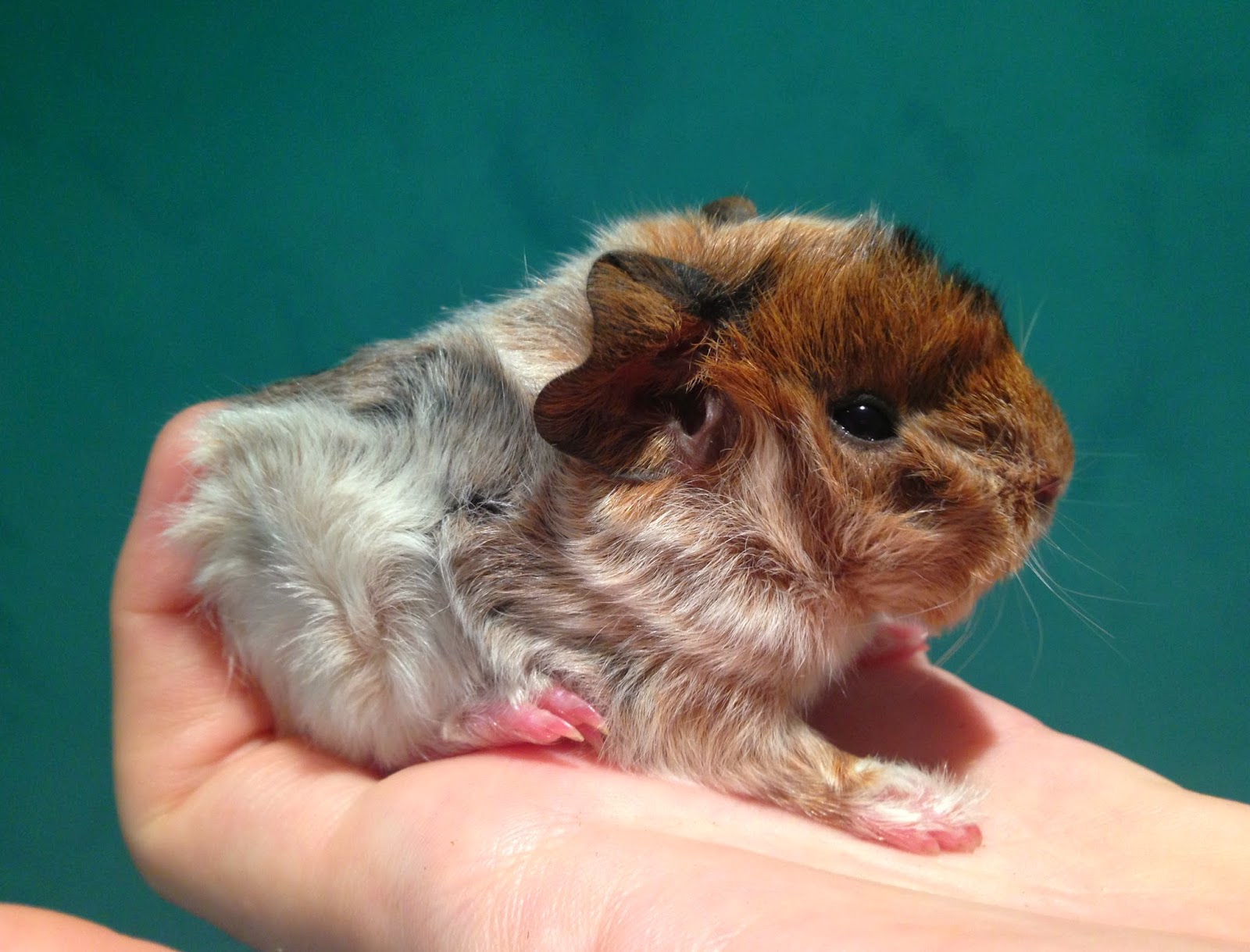 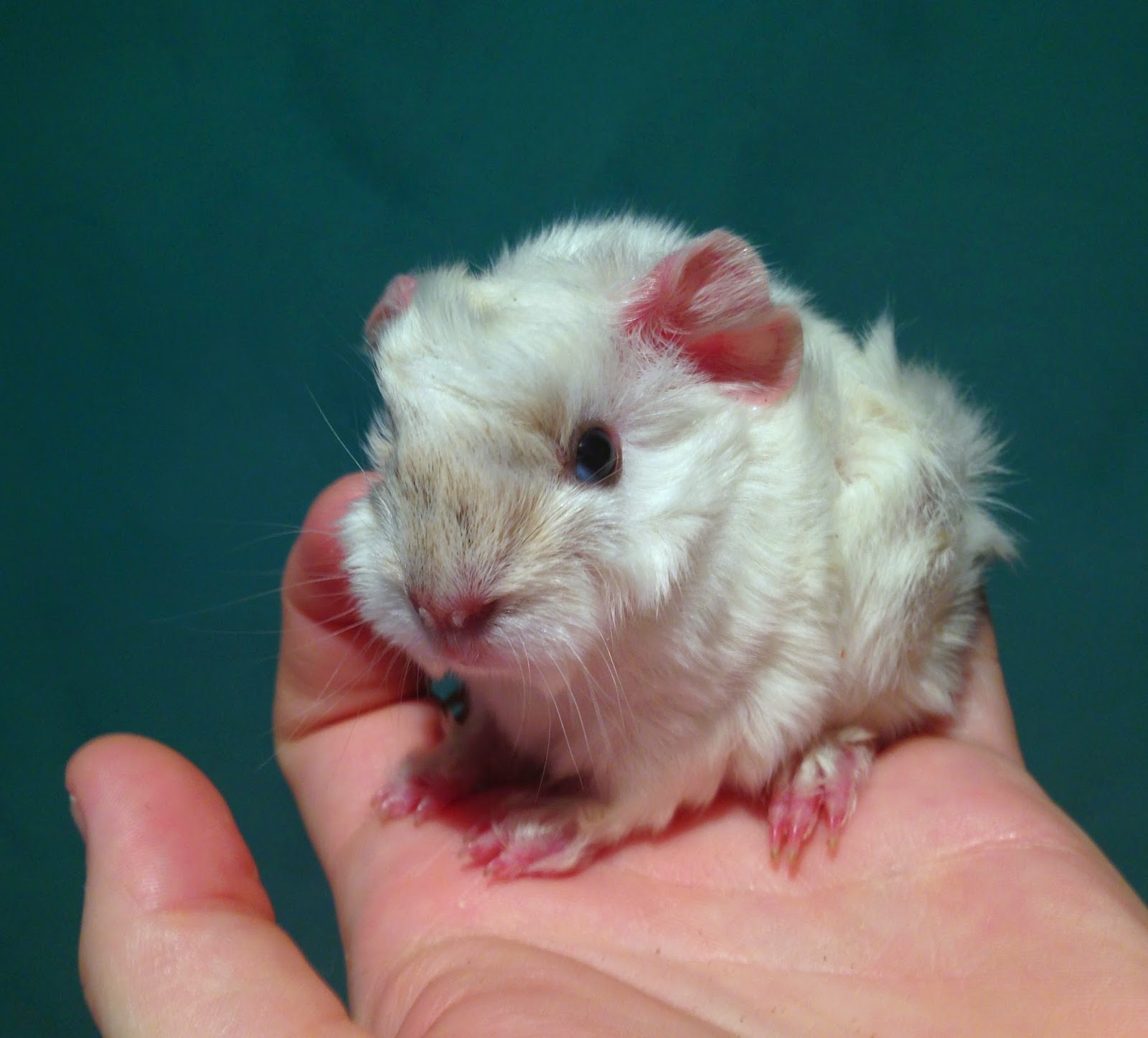 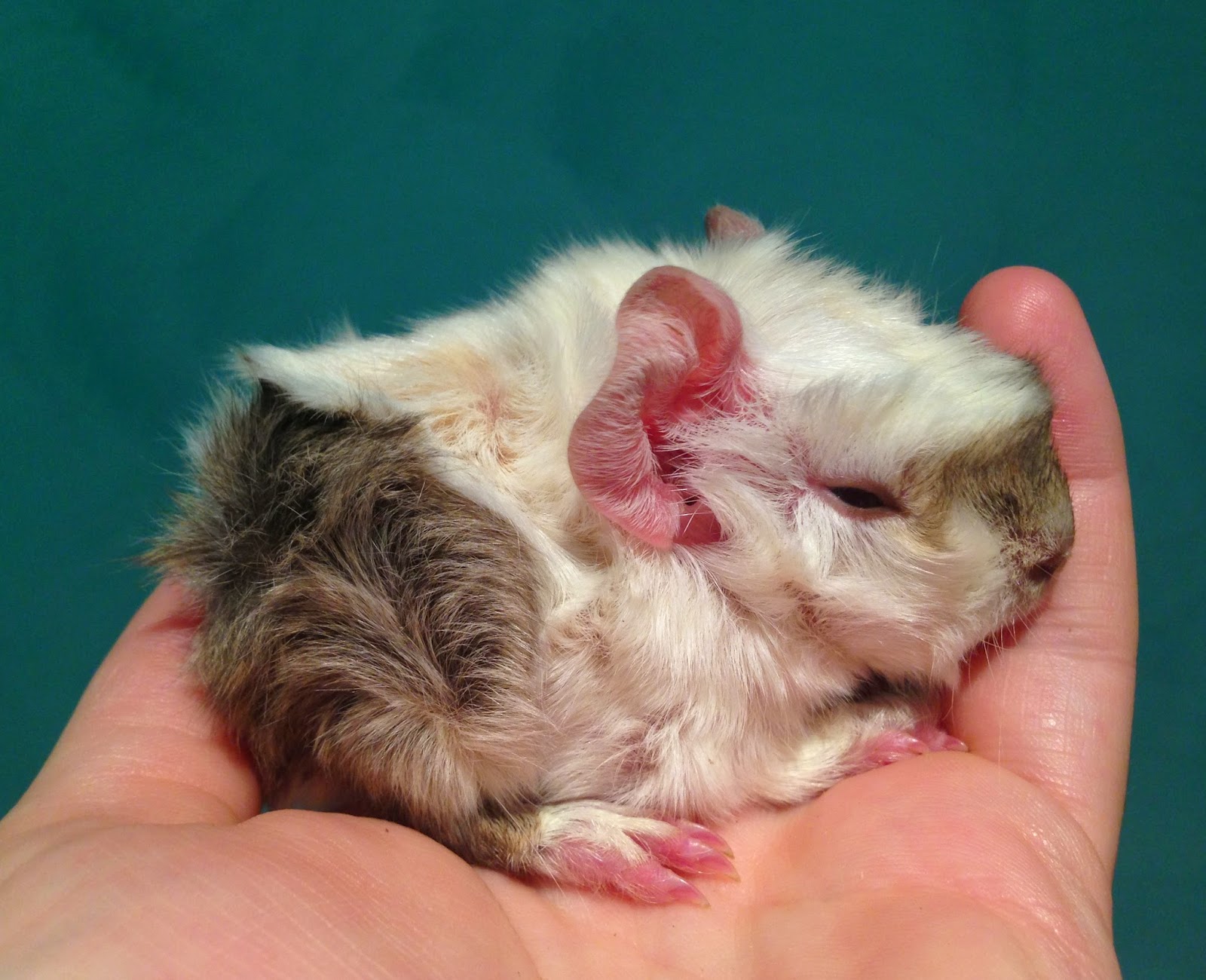 Posted by EmmasBears at 4:51 AM