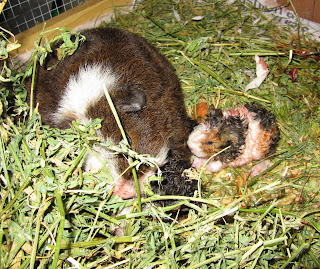 I had been obsessively checking Ruby all day yesterday (Friday). I just had a feeling. She wasn't acting any different, but she was on day 69 of her pregnancy, and she just seemed ready. I walked past the cage at about 10:50pm, and noticed a lot of licking behaviour - and spotted a soggy little bundle of curls! I rushed to her compartment and got to see the delivery of the last placenta.

Three not-so-little bubs had already been safely delivered into the world by a very competent mumma. 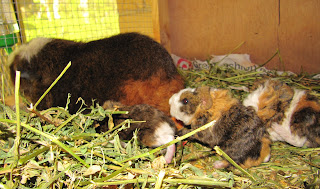 This is Zeus, the bigger boy at 100g. He is a mix of white, cream and 'cream agouti', but with much more white. He will look spectacular if his coat grows out like daddy (Liam). ('True' cream agouti is a chocolate base colour with a cream tip. These guys have a black base with a cream tip. So it's probably more of a dilute gold agouti, but that just sounds confusing!). 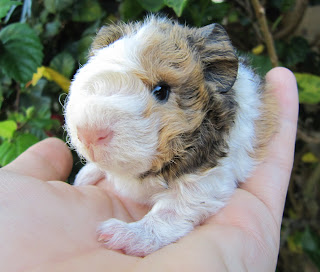 And this is Zachary. The smallest of the litter at 95g. He too is white, cream and 'cream agouti'. 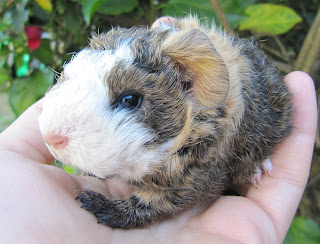 This is the only little lady of the litter - Miss Zoey. She weighed in at a healthy 100g and is a 'cream agouti' and white. 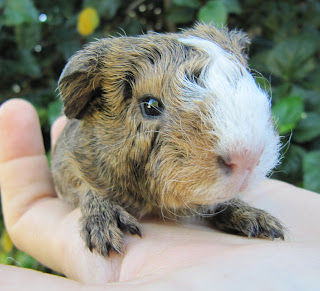 And these are two of the boys born in Ruby and Liam's first litter back in October 2011 (they're 3-4 weeks old in the first pic). They're now 7 months old and have grown full texel coats. It really is just a genetic lucky dip though. These babies all have a 50/50 chance of inheriting Ruby's short 'rex' gene, or her long 'texel' gene. Liam only has texel genes to pass on - so the babies will either end up genetically rex/texel or texel/texel. Only time will tell! 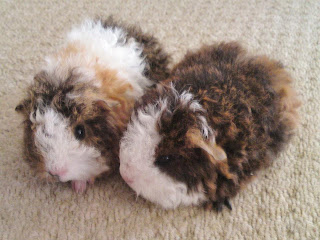 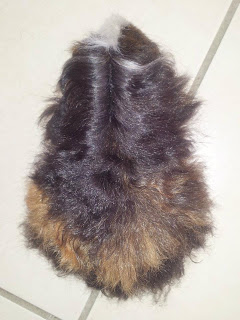 Posted by EmmasBears at 3:50 AM