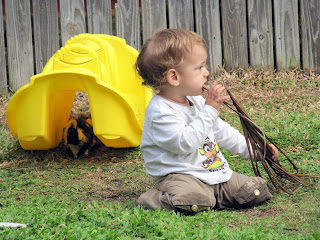 I've been a little CRAZY busy lately, and this poor blog has been neglected in favour of my facebook page because of it. So even though it's nearly midnight, I thought I'd share some random photos I snapped over the course of today.

Above is my 14month old chewing on a branch (!?) while Galaxy looks on from the safety of the yellow rocker! 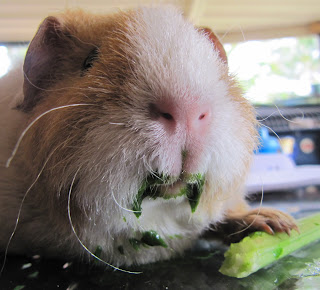 And I couldn't resist this shot - Pollyanna after munching down on a celery stalk while I felt her babies move! (yes, I can confirm she is pregnant to Liam, due approx 6/5/12). I turned her around to look at her little face and found bright green celery juice dripping in a puddle at her feet! She made a right mess of my table! But how cute is that pose - foot on the stalk like she's making sure I know it's hers! 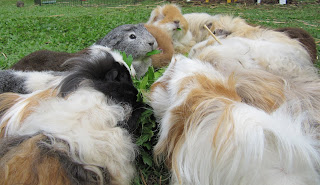 And this is what became of the rest of the celery! lol 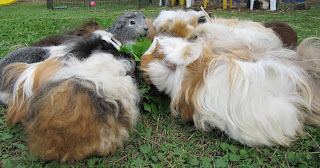 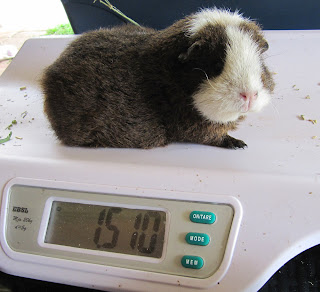 This was Ruby at her weigh in. She is the first female pig I've had pass the 1.5kg mark! Granted she is in the last week/s of her pregnancy... but still, this is one BIG girl!


And lastly, the exploring trio - Cherub, Pollyanna again and Crumble. The girls never used to venture as far as the patio, but now that the tower cage is there they're constantly walking over to say hello! So cute. And so brave! 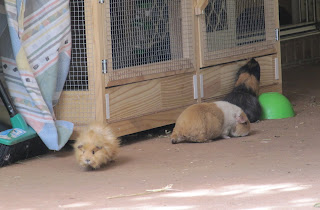 Posted by EmmasBears at 6:03 AM