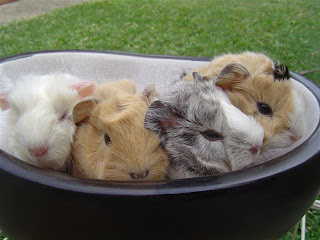 Genetics are often given a bad wrap - with most people thinking that they're too complicated to understand. I think it's a fair statement to make that the majority of guinea pig owners (and even breeders) don't have a good understanding of the genetics behind the breeds they either own or are trying to breed.

If you're just a happy 'piggy-slave' to non-breeding pets then you really DON'T need to know what their genetic make up is. But if you are planning to breed or have a registered stud, I think this is a really important bit of information to comprehend - even if you just grasp the basics.

I'm not going to assume a basic level of understanding here, but rather explain things from the beginning in common terms with as many images as I can to make this as simple as possible. You can also get some more detailed genetic/inheritance background information on this page (it relates to plants, but the basics of dominance and recessive are there) OR if you do already have a good basic understanding, you might benefit more from a guinea pig specific e-book written by another brisbane breeder that you can purchase and download here. 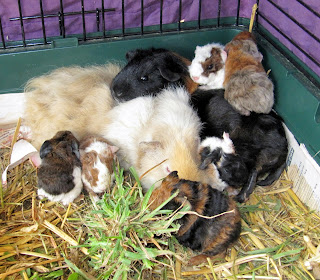 Guinea pigs make babies through sexual reproduction. This means that you need one male and one female to produce offspring. (please visit my Breeding Info page for more information on cavy pregnancy/birth/newborn care if you're looking for more of the 'nuts and bolts' type info ). 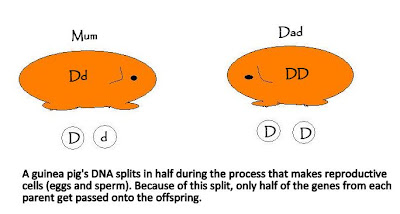 When the guinea pig's body is making the reproductive cells (eggs for girls, sperm for boys), the usual 64 chromosomes (DNA make-up found in every cell in their body) are split in half to make the sex cells (which will contain 32 chromosomes). This means that when the guinea pig's sperm meets the egg, the two 'half' cells join and create the perfect amount of full, new DNA for the new baby .This also means that only half of a parent's genetic make up is passed onto their offspring.

In this extremely simplified example above you can see that the mum's DNA consists of two different genes 'D' and 'd', whereas the dad is 'pure' - both of his genes are the same ('D' and 'D').

When the eggs are made by the mother guinea pig, half of them will be genetically capitol 'D', while the other half will be lowercase 'd'. When the sperm is formed by the father, they can be nothing other than capital 'D' as this is all he can offer genetically. This is why true, pure-breed animals will produce identical babies when paired together, and why cross-breed animals can produce a whole host of different babies depending on what genes they are carrying.

This is when we get into the dominant genes and the recessive genes. Dominant genes mean just that - they dominate their corresponding recessive gene. This usually means that there only needs to be one copy of the gene at the cellular level to produce the physical appearance in the animal's coat (with some exceptions we can get to later). With recessive genes you need two copies to get that particular appearance in the coat. The example I've drawn below is for a rosetted (Abyssinian) coated guinea pig crossed with a smooth coat guinea pig. Rosettes are dominant in guinea pigs - so I've used a capitol 'R' to represent a rosette gene and a lowercase 'r' to represent the lack of rosette, or smooth coat. 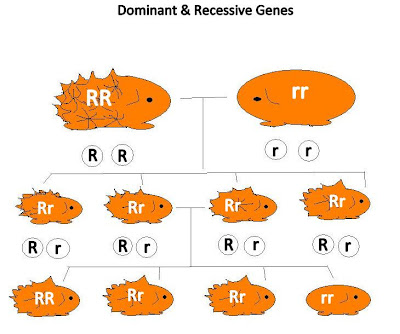 In the first generation we have a 'pure' rosetted guinea pig (RR) crossed with a 'pure' smooth coated guinea pig (rr). The genes are split in half to form the sperm and eggs and are paired up to produce 4 possible pairings - all end up being genetically half rosetted, half smooth (Rr). BUT - because the rosette gene is dominant, these babies will have rosettes in their coats, and will look a lot like a pure Abyssinian. (The rosette placement might not be as nice as on the parent guinea pig though due to the presence of the recessive gene/complicating factors from other genes).

If we were to then take two babies from the second generation and breed them together, we would get different results again. This time, because both of the guinea pigs in this pairing are genetically half/half (Rr), there are 4 possible pairing combinations that could occur: RR, Rr, Rr, and rr. The 'RR' baby would likely look just like it's siblings who are 'Rr' - so there would be no way to tell what it's genes were until it came time for it to breed. The baby with the 'rr' genes would look smooth coat like it's grandparent. This is how different breeds can 'pop' up in crossbreed litters. Only recessive characteristics pop up unexpectedly. Dominant genes are seen in the animals coat/colouring.

Dominant genes in guinea pigs include (but are not limited to):
* Rosettes
* Short hair
* Dark eyes
* Straight hair

Recessive genes in guinea pigs include (but are not limited to):
* Smooth coat
* Long hair
* Red eyes
* Curls

Long and short coat genes can act a little less clear cut than the simple dominant and recessive roles. Generally the short coat is dominant and the long coat is recessive. If you have an animal with hair that grows to the ground, that animal is guaranteed to have two copies of the recessive long-coat gene (which I'm referring to with a lowercase 'l' in the diagram below). It becomes less clear with the short-coat gene.

A pure short coat animal with two copies of the dominant gene - LL - (here we're using a capital 'L' to represent this  dominant gene) can often look exactly like a cross-bred half long-coat/half short-coat animal (Ll). BUT - the short-coat gene is not always completely dominant, and a lot of half/half animals will have telltale longer strands of hair on the lower half of their bodies while having short hair everywhere else. 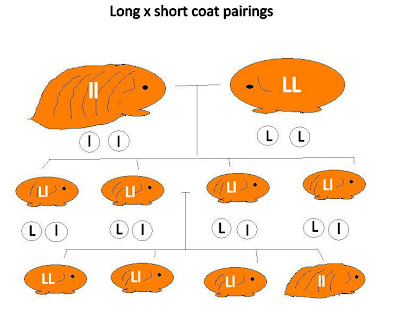 In the pairing shown above we've taken a pure sheltie (long-haired guinea pig) and crossed it with a pure short-coated guinea pig. The resulting offspring will all be genetically half/half. They would likely either look just like their short-coated parent, or have a few wispy longer stands on their rumps.

If we then crossed two of these second generation guinea pigs, we would be left with 4 possible genetic combinations - LL (pure short coated), Ll and Ll (both half/half again) and ll (pure long-coated) - this animal would end up looking like it's grandparent. Again showing how recessive genes can pop up generations later.

Obviously the possible pairings are just statistical odds - it just means that if there were 4 babies born from the litter, chances are that 1 would be LL, 2 would be Ll and 1 would be ll. You may well get 4 babies who are all genetically LL, or all of any of the other combos. You could have a single litter who is ll... or 2 babies that are both Ll like their parents... you really have no idea which eggs and which sperm are going to meet.

We work out the statistical odds by using a probability grid (see below:). This will obviously look different for different pairings. For example if both parents were pure for long coats (ll x ll), you'll have a 100% chance of babies also being ll as the parents have nothing else but the long-hair gene to pass on. 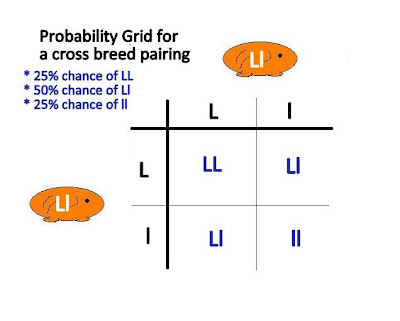 There are many urban myths out there of offspring born to parents who could not have possibly produced their specific coat-type. For example, you cannot breed an abyssinian (RR or Rr) from two smooth coated guinea pigs (rr) - even if the smooth coat came from aby parents as they do not have the rosette gene to pass on.

Likewise, you cannot breed a short-coated guinea pig (LL or Ll) from two pure long-haired parents (ll). Nor can you produce a straight-coated animal from two curly parents (unless both parents had different curl-genes, not very common in Australia, but has happened in the past when imported pigs were paired with Australian pigs - this is something that would need a whole other page devoted to it). We will discuss basic curls and straight-coats below. 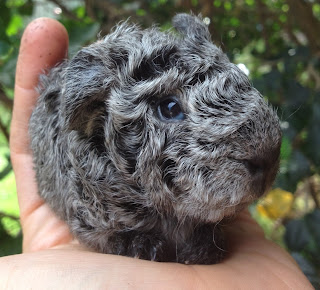 I've always had a soft spot for the curly-pigs. Specifically the long-coated curlies like Texels, Merinos and Alpacas, but Rex pigs are gorgeous too! In AUSTRALIAN guinea pigs, the curly gene is recessive and the straight hair is dominant. This is how curly texel babies can be born to straight-coated sheltie parents. (You cannot get a sheltie from a pairing between two texels as texels have nothing but the curly gene to pass on to their offspring).

In the diagram below I have shown how it is possible to get texels and shelties from different pairings. For the purposes of this information I am referring to the dominant straight coat gene as capital 'S' and the recessive curly gene as lowercase 's'. In the first generation we have a sheltie who carries the texel gene (but would otherwise just look sheltie in appearance) paired to a texel. If you don't know the ancestry of your sheltie, a pairing like this would show you if he/she was carrying the texel gene. If the resulting babies were all shelties, you could assume that there were no recessive curly genes to pass on and your sheltie was just sheltie (obviously with the laws of probability you may not see a curly bub even when the parent is carrying the curl - so you would never be able to be 100% certain.) 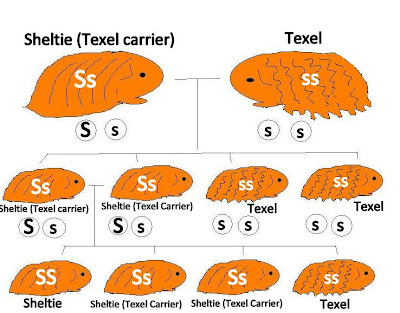 In the diagram above we have hypothetically paired two of the sheltie-looking offspring from the second generation who both carry the texel gene. The results of a pairing like that would statistically produce 25% 'pure' sheltie (SS), 50% Sheltie (carrying texel) and 25% texel. Due to the complete dominance of the straight coat over the curl, you would not know which babies were genetically 'SS' versus 'Ss'. If any babies came out with curls though, you would be guaranteed that their genetics would be 'ss' for curl. 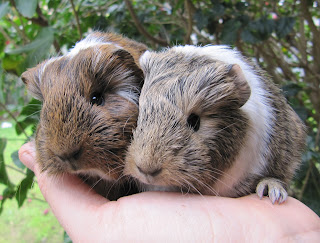 Obviously the complexities of guinea pig genetics are a lot more intricate than I have explained here. You don't have only one genetic factor to take into account with each pairing, but countless subtle additional ones (body shape, type, coat density, colouring, rosette positioning etc). However, if you can grasp the basic fundamentals of the coat-type and the dominance and recessive nature of the genes it may help you in your future pairing decisions.