These are some photos of Lulu's ear that I took yesterday. You can see how much the fungal infection has cleared up since we first got her. And that was only 5 days worth of treatment. 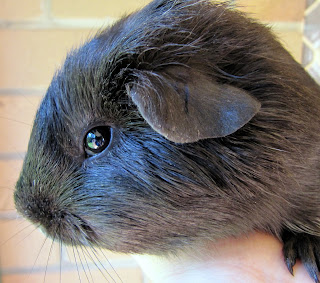 All I did was bath her in Malaseb, used a bit of betadine on the ear for the first day or so - it didn't seem to be responding to that, so I pulled the big guns out - canesten cream! I think the skin was quite dry/sore/damaged too, and the canesten has moisturiesed it a bit as well. She'll need the cream for at least another week or two, even after the skin looks normal again. Just to make sure the last of the fungal spores are killed and it doesn't come right back again.

She's starting to calm down a bit more too, which is nice to see. She's so patient with me while I fumble around trying to get cream on both sides of her floppy little ear. Her babies are among the most active I've felt in a mumma piggy too (which could also be due to the fact that she's so little, and the skin is so stretched already that there's not much between my hand and their little feet!).

She's a lovely little girl and will make an awesome, gentle pet when the whole 'baby thing' is over! ;)
Posted by EmmasBears at 4:23 PM