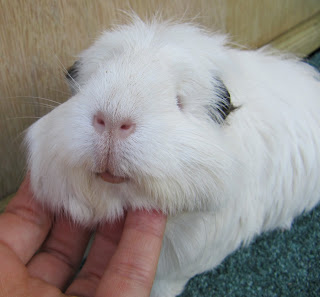 Beeno has been a naughty girl.

You wouldn't think it to look at her. She looks like butter wouldn't melt in her mouth. But she's actually quite a mean little lady. 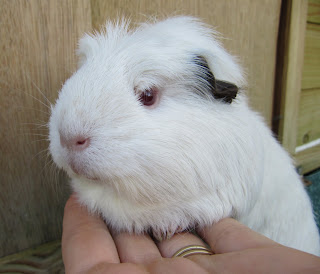 She's always had a bit of a nasty-streak. I had to separate her from the main girl group when she was only a few months old due to fighting (particularly with her sister Alba). I thought she and Sprout would pair up nicely. Then I found her fighting with Sprout. So back into the mansion she went. Things were ok for a while, but over the last few months I've been watching her slowly revert to her old anti-social ways. She just isn't cut out for living with other guinea pigs, male or female. 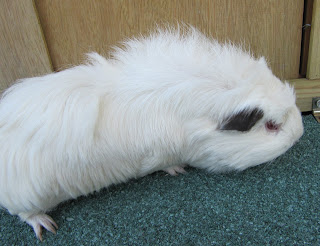 [Showing off Beeno's funky ridge-back effect. On top of the crazy ridge, she also has a huge crest, and the thickest, semi-long hair ever! She's an unusual lady...]

Guinea pigs are normally really social creatures, and prefer the company of their own species, but I actually think Beeno prefers humans. And dogs! (she's the only one who'll stand nose-to-nose with our beagle through the bars of the grass pen).

So, after careful consideration, and many weeks of deliberation - I've decided Beeno needs to find a new home where she won't be so constantly stressed out by having to live with other guinea pigs. Ideally, someone who has a bit of time to spend with her each day as well, as living without company can be a bit lonely (mind you, Beeno will probably be the most chilled out she's ever been!).

She is NOT good to use for breeding, firstly because she's right on the cusp of safe breeding age, and has not had a litter. Secondly because this angry temperament is best not passed on to the next generation!

So, if you're searching for a funky looking pet, with just a touch of attitude, and have the capacity to let her live in solitary comfort for the rest of her days - send me an email (eleb2000@hotmail.com).
*** She will be available from the weekend of the 21st October, when I will be 110% sure she is not pregnant! *** 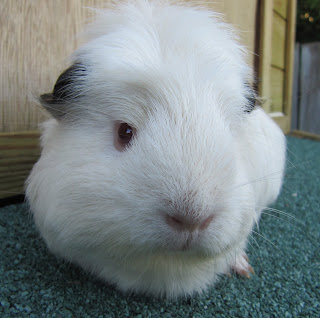 Posted by EmmasBears at 4:05 AM