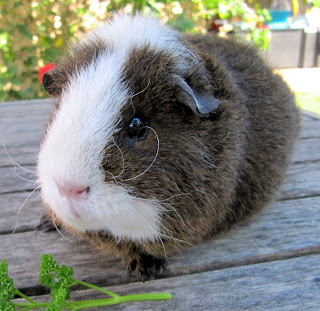 Ruby has been getting quite fat lately. And by quite fat, I actually mean REALLY fat!!! She is very quickly catching up to Subi for the status of fattest piggy at our stud!

Rex guinea pigs are inherently bigger than other breeds, so this didn't really strike me as too odd. Until I thought to just check Ruby's pelvic bone today, just in case she might be pregnant. [the bone just above the genitals on a female guinea pig will start to open anywhere from about 2-7 days before birth. It will reach about 2-fingers width apart when the guinea pig is ready for delivery. Birth should happen within 24hrs once full dilation is achieved]. Sure enough, pelvic bone is just starting to open, suggesting she's about a week away from delivery of her baby/s. Babies I didn't even know were cooking away in there! :P 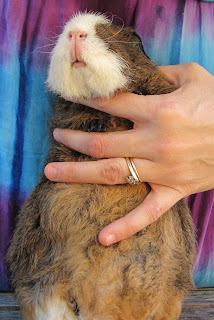 The reason for this sooner-than-expected delivery is due to a little moment of anxiety on my behalf a few weeks ago. I was watching time ticking by with the girls getting older and older, and not seeing any evidence to suggest that Liam was doing his job of stud. [With young female guinea pigs you only have a limited window of opportunity for them to have their first litter, or they will not be able to be bred again. It's best to aim for their first 'sleepover' with a boy after 4-6months of age (or after 600g weight), but before 8-10 months old. Once a guinea pig has passed 10-12months old with no previous births, there is a high possibility that their pelvic bone will be fused, making future delivery impossible.]

So, with the time pressure in the back of my mind, I decided to let all the 'of-age' girls have a few garden parties with Liam in the grass run. One day here, one day there. Not really knowing if the encounters would coincide with any of the girl's fertile days, but figuring it was better than not doing anything.

When Sheba finally delivered, and the dates/appearance of the boys linked back to being that of Liam's handiwork, I was able to relax - and we've now gone back to single-girl sleepovers. But I have a feeling those garden parties may result in a few litters in the next 4-5+ weeks, with slightly chubbier tummies on Beeno, Sparrow and maybe Alba as well. I'll keep you posted on preg-watch over the coming weeks. 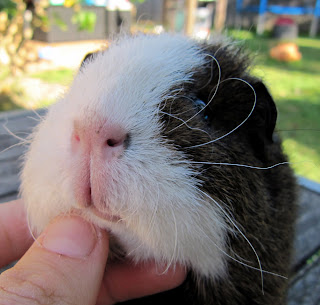