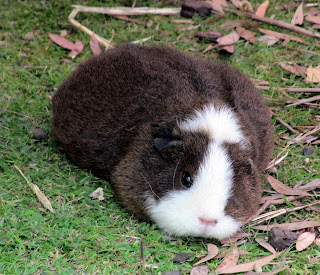 (Ruby and her massive belly, trying to get comfortable this afternoon)

*** Liam's Love Shack ***
Liam is 880g (same) - 23wks (6m)
Ginger is 950g (gain 15g) - 26wks (6.5m)
Alba is 805g (lost 40g) - 29wks (7m)
(Alba has joined Liam's house this week. I thought that she was pregnant a few weeks ago, but nothing has eventuated of the slightly pudgy tummy. So considering her window of opportunity to have her first litter is quickly closing, she'll now stay with Liam for the next month or so. She may simply end up being one of those guinea pigs who just don't conceive for various reasons, and if so, that's perfectly fine. She can just have Nanny-Duty with Custard!)


*** Sprout's Pad ***
Sprout is 820g (gained 10g) - 23wks (5.5m)
Subi is 1185g (gained 45g) - 2.5yrs
(Kobe (who had been bunking down with Sprout until now) has started dilating. Which means she should deliver some time this week. I had been estimating her due date purely going by her size, so this has caught me by surprise. She's barely even showing, which for a pregnant short-haired mumma piggy is quite unusual. So she has moved out, and Subi has moved in!)


So again, a mixed week this week. BIG gains from Sheba's boys. But Sheba has dropped another 25g this week. I think the boys are certainly big enough to be weaned. And poor Sheba needs some time to recover. Hopefully she'll start regaining condition over the next few weeks.

We also now have three ladies ready to pop this week. Ruby's still partially dilated, Galaxy's pelvic bone is beginning to open, and Kobe looks like she's actually a lot further along than I thought as well. So it is quite possible that next weeks weigh in with include a number of gorgeous new additions! 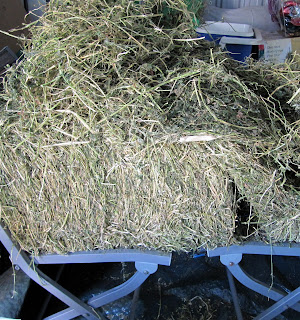 I had a chance to go through the new bale of hay purchased yesterday too. Unfortunately it isn't the best quality I've ever worked with. I'd say it's probably about 50% weeds and prickles, exactly what I was dreading. 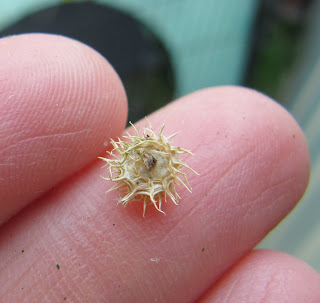 It's still quite soft/green though, so most of the prickles aren't hard enough to hurt (I was delving my hands right into the bale with no problems. But I do have my concerns about the guinea pigs eating these, or these prickles get tangled in their fur. So I will (again) spend ages trying to get most of the weeds out before I feed the hay to the pigs. [sigh] 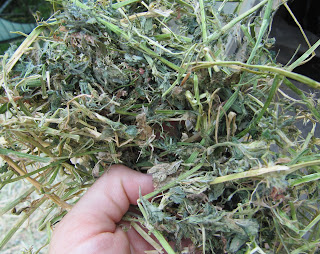 Posted by EmmasBears at 7:47 PM