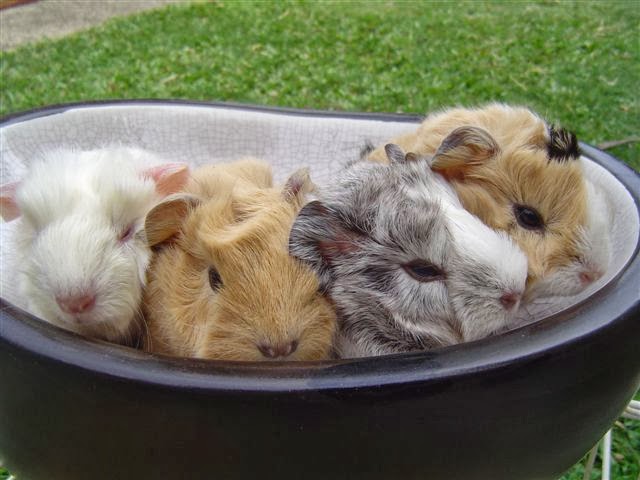 Happy New Year everyone! Isn't it crazy that we're in 2014 now - and in fact actually half way through January already!!! I ALMOST missed our eldest pig's 7th birthday on the 13th as well. I had my sister-in-law visiting and my 2yr old neice, and we were cuddling the guinea pigs and talking about how old Custard was when it suddently ocurred to me to check the date. It was the 13th! Custard was 7yrs old!!!

We all sang her happy birthday - to which she just sat there looking suspiciously at us! I don't think she knew what was going on! She is now officially my oldest living guinea pig I have ever owned. The last oldest was one of my first pigs from my childhood, a peruvian called 'Fuzzer'. He lived till about 6yrs, passing away quietly in his specially designed comfort-cage in my room when I was about 15yrs old.

Custard definitely shows her age. Her coat isn't quite as glossy as it once was, and her claws are a little knarley. She doesn't like to be picked up a lot any more and tenses herself. But she still has a strong enthusiasm for fresh green grass and a new bowl of grain mix! The photo above shows her and her 3 sisters the day they were born. From left to right we had 'Bundy' the little white one, 'Custard', 'Sweep' the silver agouti and white one and lastly 'Sophie' the cream/white/chocolate one. We were so lucky to get a litter of 4 girls - that very rarely happens. But the girl's mum was not so lucky. Something went wrong with her recovery and she passed away about 4 days following the birth.

We were so worried that the girls wouldn't survive without their mum, and I remember driving around to all the local vets trying to find one that had a guinea pig suitable formula mix I could feed them, only to be told there wasn't anything suitable. I was told to just wait and see what happened. So we did - and the girls surprised us! They were so strong and active that they just kept on with eating solids (vegetables, grass, hay etc) and thrived. 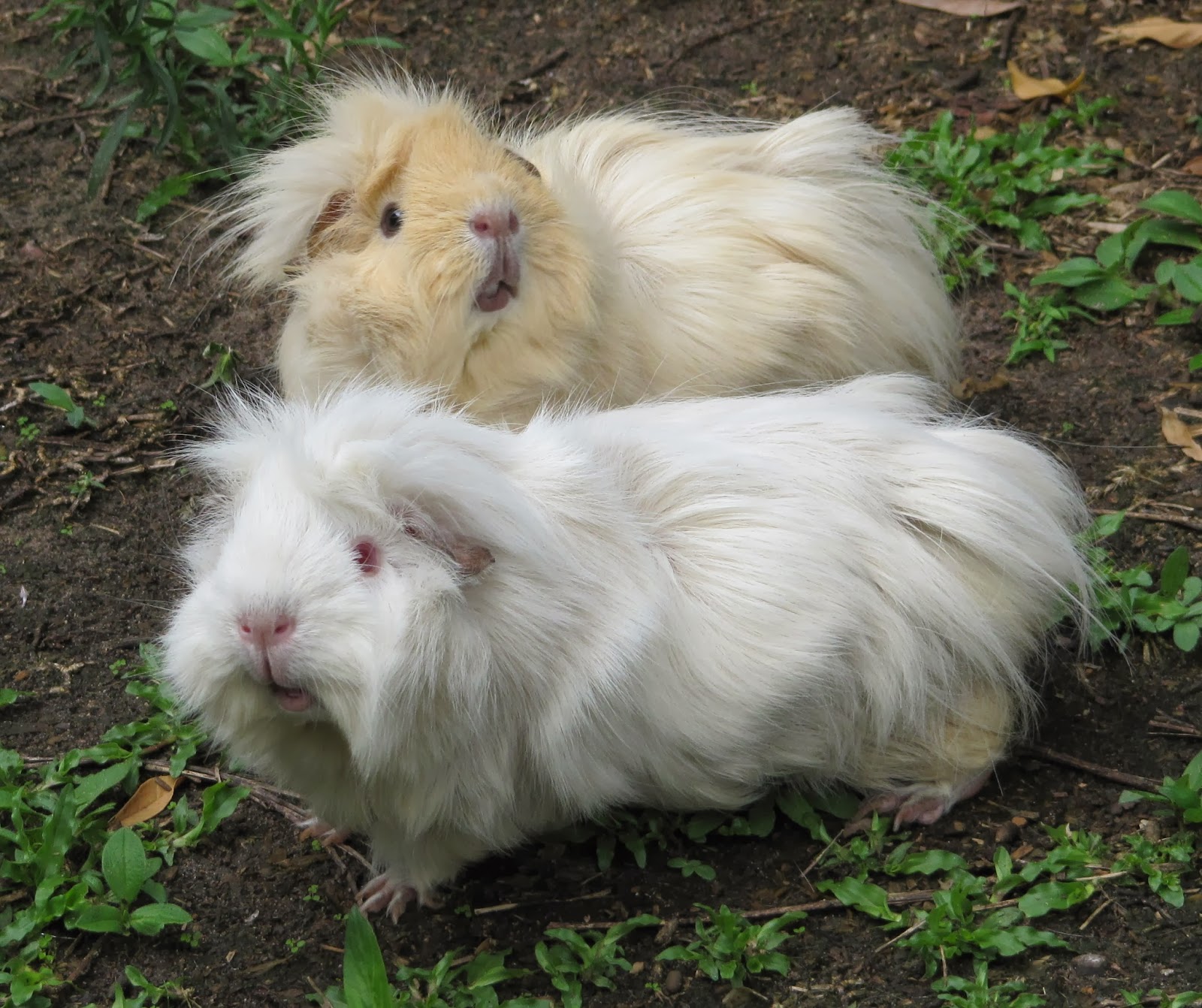 (This is Custard and her sister Bundy enjoying some free-range time. They were approx 2yrs old here) 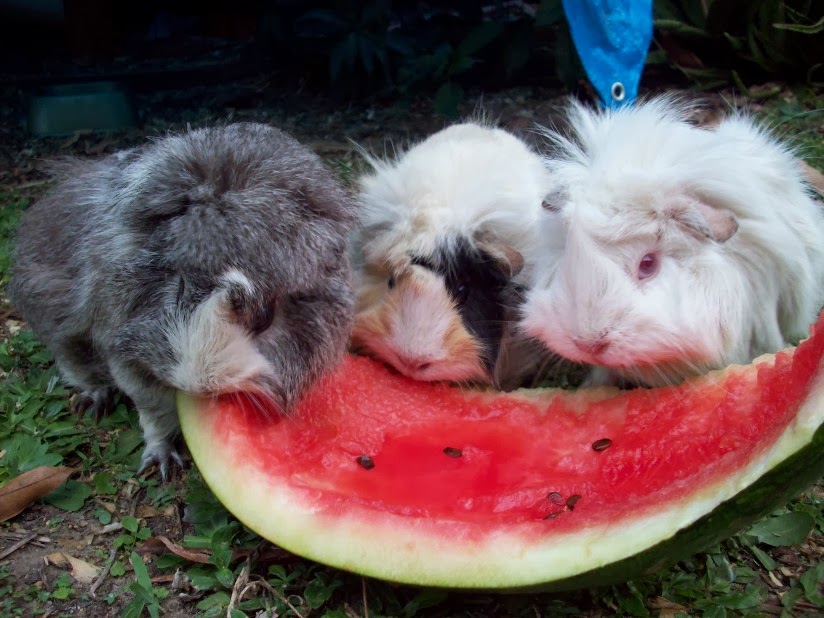 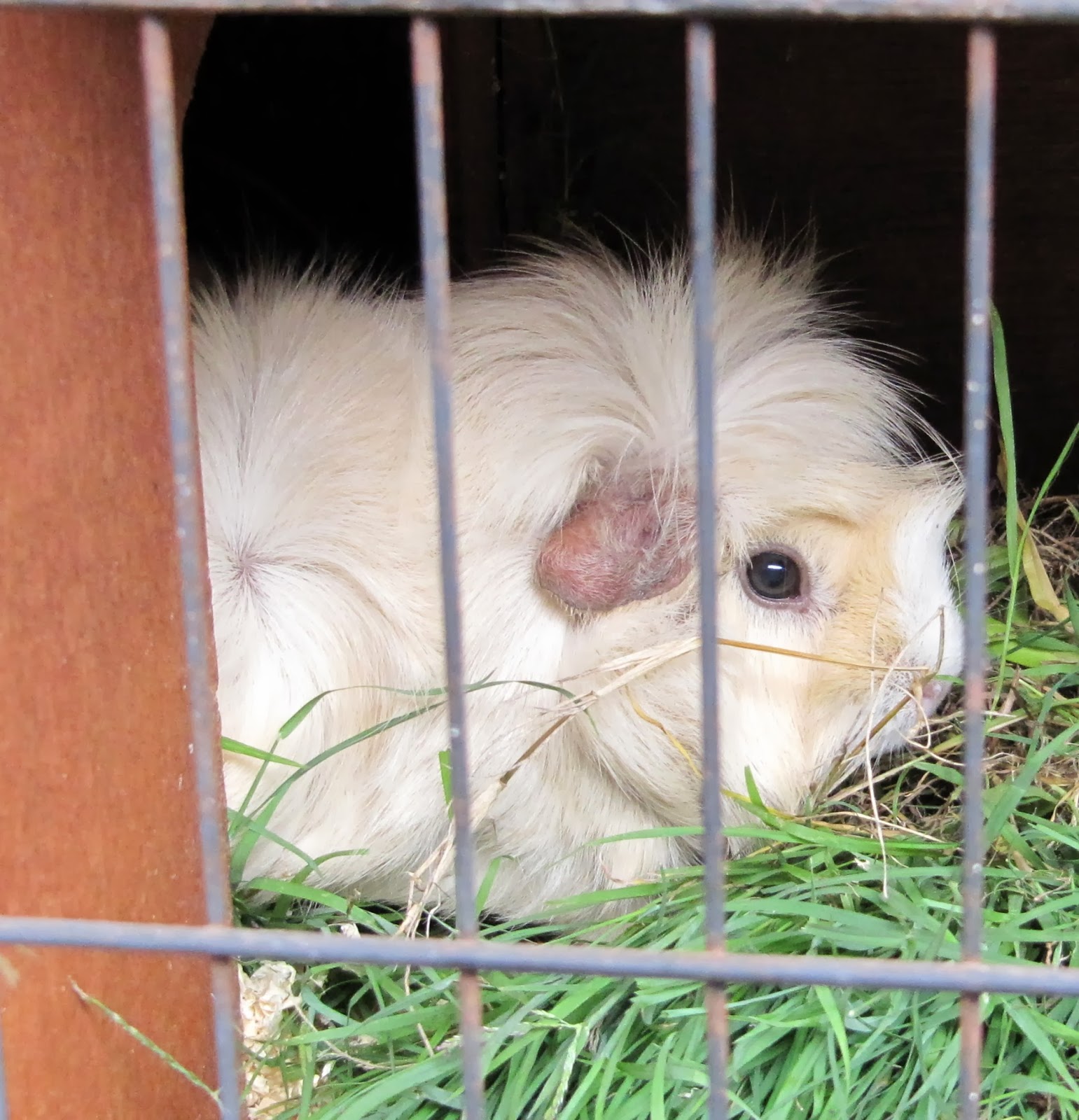 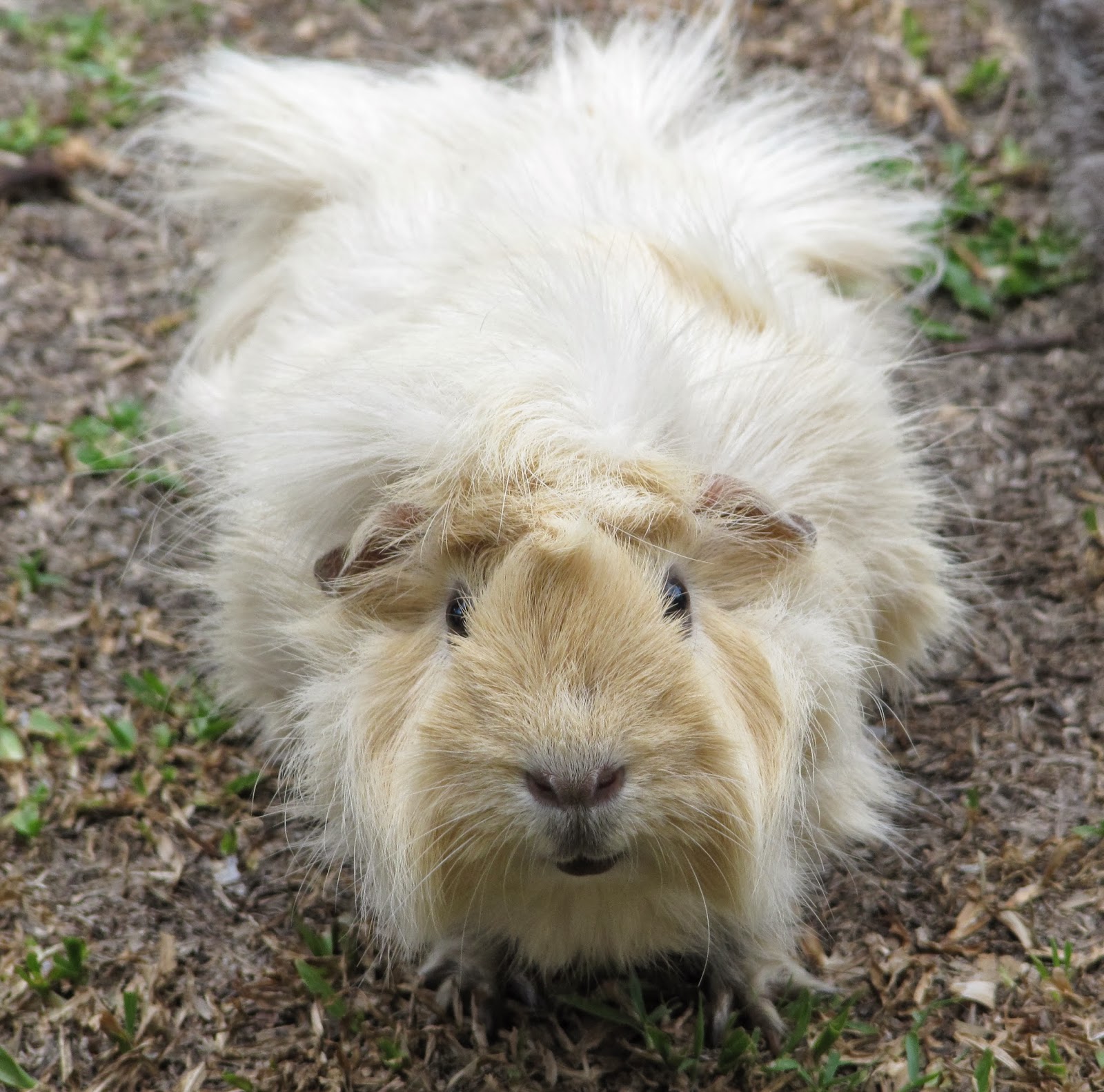 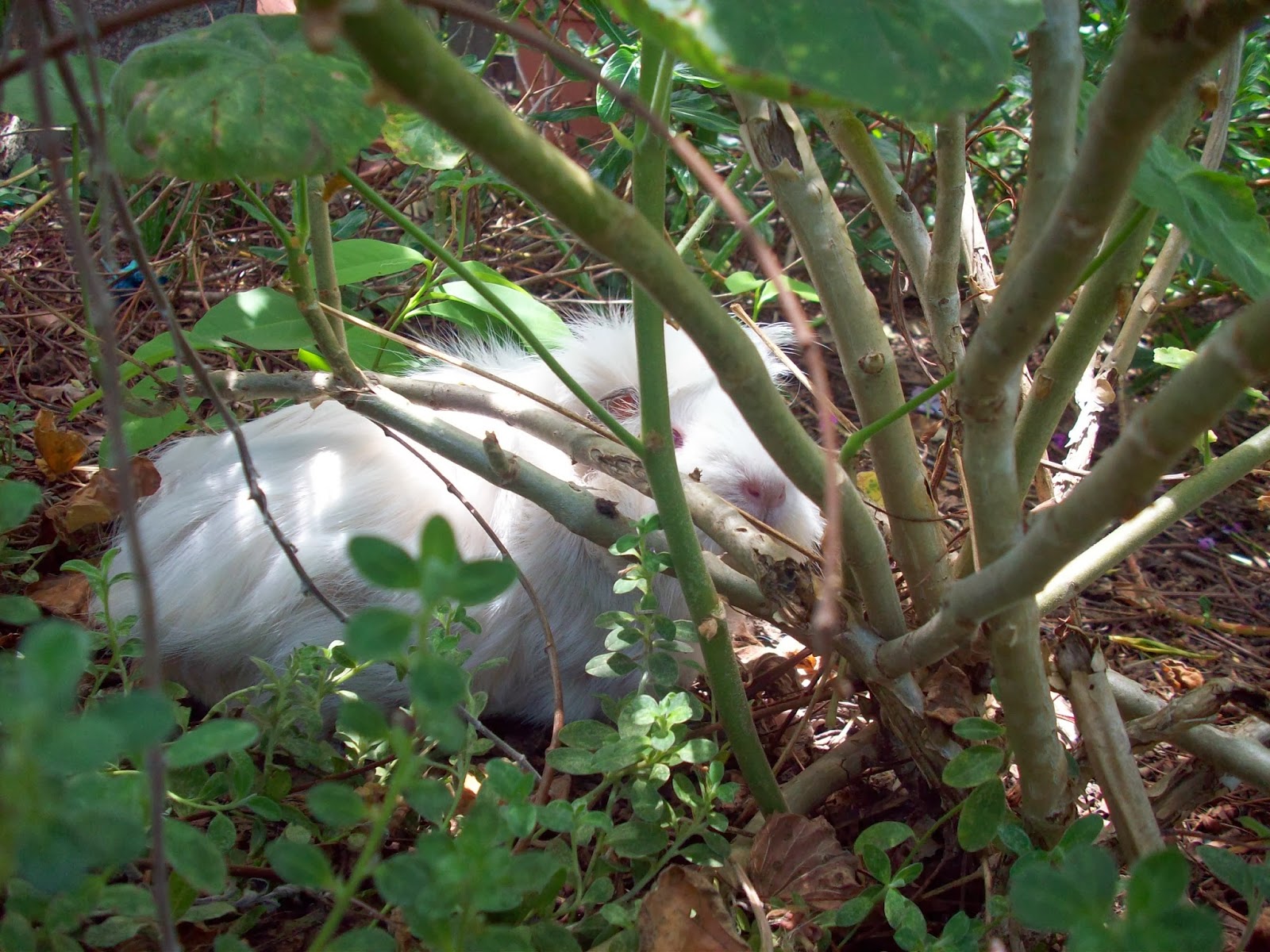 (And Bundy, hiding in the garden. She liked to think you couldn't see her if she did this - I hated to remind her that she was bright white and stood out like a sore thumb!)


Sadly, Custard's three sisters didn't survive as long as she did. Custard is the last remaining pig from her litter. She may have even outlived her father (a pedigree cream sheltie called 'Noah's Arc Sullivan') who went to live with another cavy stud shortly after the girl's birth. 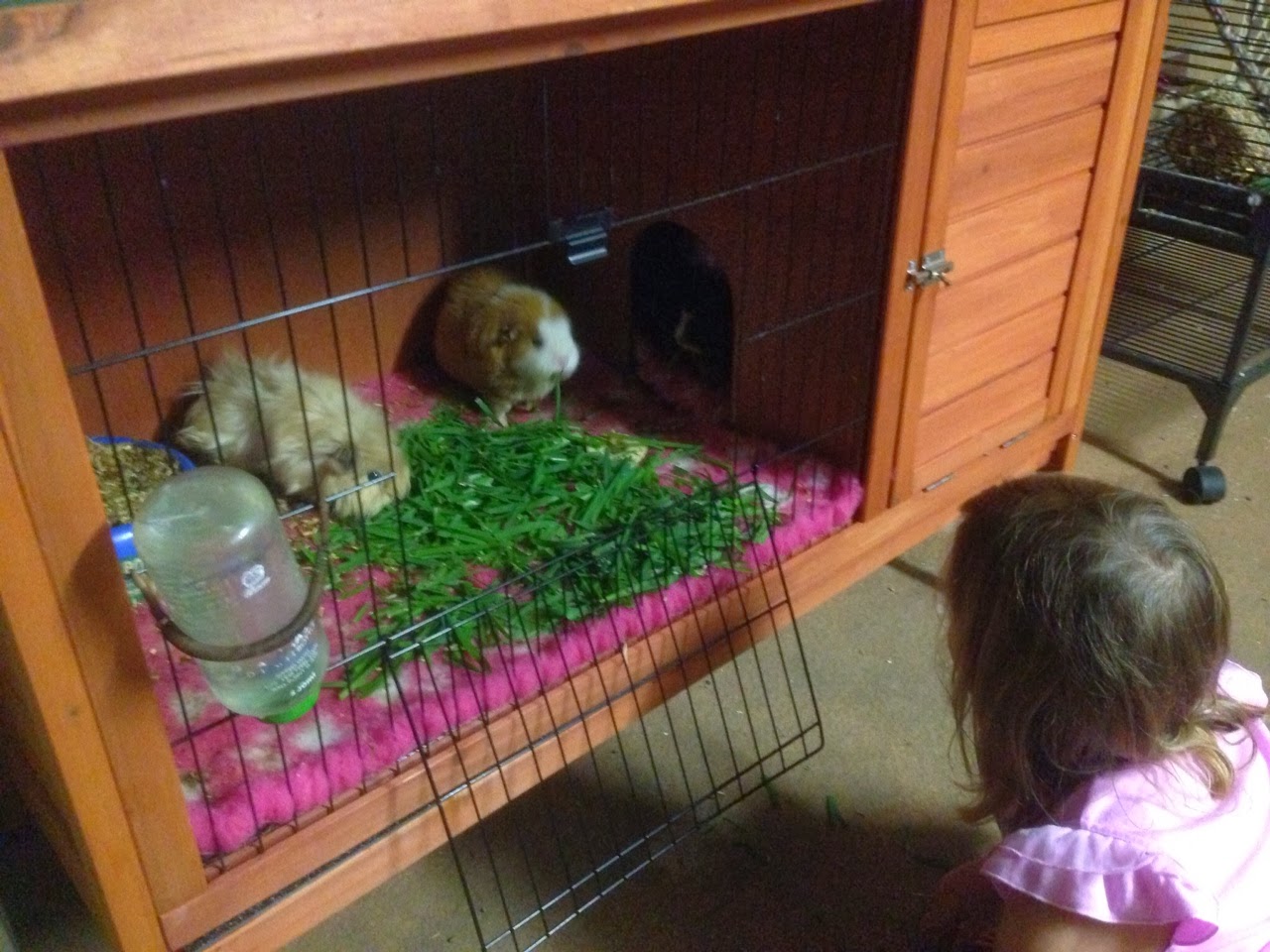 So this is where Custard lives now. How ever much longer she has on this earth, she'll be able to spend it lazing about on her pink vetbed bedding, munching on freshly cut grass and hanging out with my daughter's pigs 'Kobe' and 'Lilly'. All three of them get along so well.

I will have to get some updated pics of the three of them together again as little Lilly has grown quite a bit since the last photos. It looks like she'll end up with the slightly longer fuzzy rex coat rather then the longer texel look of her dad. Will try and do that before the week is out :)